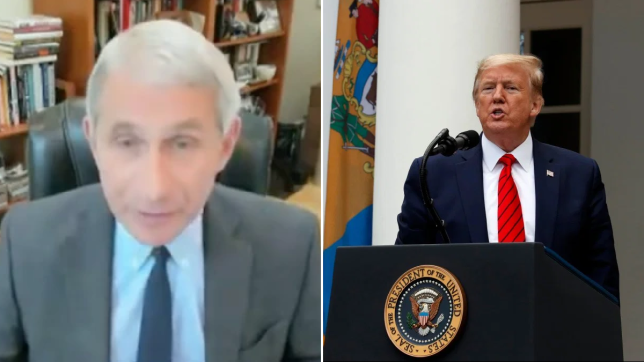 The United States’ top coronavirus doctor has warned prototype coronavirus vaccines could end up making Covid-19 patients get sicker if they contract the disease.

White House immunologist Dr Anthony Fauci offered the warning while giving an update on efforts to develop vaccines at an online US Senate hearing on Tuesday. He said: ‘I must warn that there’s also the possibility of negative consequences, where certain vaccines can actually enhance the negative effect of the infection.’ Dr Fauci later explained that in rare cases people vaccinated against a condition could end up contracting the virus they thought they’d been protected against, and falling more seriously-ill with that disease as a result

He said: ‘Do you get an enhancement effect (from the disease)? There have been a number of vaccines, when the vaccine induces a sub-optimal response and when the person gets exposed they have an enhanced pathogenesis (development) of the disease.’ He said such instances were very rare, and had only occurred with two previous vaccines developed for other viruses.

Dr Fauci said the most important issue with any successful vaccine was its efficacy – ability to produce the desired result – in this case, the prevention of coronavirus infections. Explaining the key questions researchers face, Fauci continued: ‘Will (efficacy) be president or absence, and how durable will it be?’

Tuesday’s hearing will see senators grill Dr Fauci and others on the United States’ response to the Covid-19 crisis, with the disease so-far confirmed to have infected close to 1.4million Americans, with over 81,000 dying of Covid-19-related causes.

During an opening statement delivered via webcam from the National Institute of Allergy and Infectious Diseases, where he is director, Dr Fauci sounded a note of hope on progress to manufacture a successful vaccine which could prevent people getting coronavirus in the first place.

He said: ‘There are at least eight candidate Covid-19 vaccines in clinical development, with the NIH (US National Institute of Health) collaborating with pharmaceutical (companies on products) in various stages of development

‘In January I said it would take one year to 18 months if we were successful in developing a vaccine. The trial moved very quickly. 62 days later we are now in phase one clinical trial…’

Dr Fauci said phase two and three would begin within the coming weeks, and would include animal safety tests.

He continued: ‘If we are successful we hope to know that in the late fall/early winter. We have many candidates and hope to have multiple winners…this will be good for global availability if we have more than one successful candidate.’

The veteran immunologist also explained the unknowns he and other scientists still face with trying to beat a new disease. Dr Fauci said ‘We will producing vaccine at risk, which means we will be investing considerable resources in developing doses even before we know any given candidate or candidates work.’

A leak of Dr Fauci’s statement obtained by The New York Times earlier on Tuesday said plans to reopen the US too early would cause ‘needless suffering and death’ by potentially causing a second spike of infections.

During Tuesday’s hearing, Dr Fauci also agreed with Vermont Senator Bernie Sanders that the United States true Covid-19 death toll was likely higher than the 81,000 fatalities reported so-far, but refused to estimate what percentage higher the actual death toll might be.

And he struck an optimistic tone when asked about the threat of a second wave of Covid-19 returning this winter, saying he was confident the United States had enough time to prepare to minimize the harm it could cause.

Get in touch with our news team by emailing us at webnews@metro.co.uk

Clark County Wetlands Park
Clark County Wetlands Park is the largest park in Clark County spanning 2,900 acres along the Las Vegas Wash. Clark County Wetlands Park has two sections, one is a 210-acre wetlands nature preserve with over 3miles of flat paved trails passing through desert vegetation, cottonwood grove,
Lion Habitat Ranch, NV
Lion Habitat Ranch was started in 1989 as a nonprofit sanctuary dedicated to take care of lions, educate people about animals in the conservation, and illustrating the importance of animal conservation.
Casino Fandango
Casino Fandango was opened in July 2003 after the renovation of an 80,000 square feet warehouse. Casino Fandango has a total 42,943 square feet gaming space, movie theater,
Stratosphere Tower
Stratosphere Tower Las Vegas or The Strat is an iconic hotel and casino in Las Vegas. The Stratosphere Tower total height is 1,149 ft (350.2 m). It's tallest free-standing observation tower in the United States.
Ghost Town
A ghost town refers to a deserted or abandoned city, town, or village with some remaining buildings and infrastructure. Most ghost towns in the state of Nevada started of as mining boomtowns but were later abandoned when the mining business declined
The Hanging Tree
The Hanging Tree is an infamous tree where Adam Uber was hung. The story goes that in 1987, a crime occurred in Genoa, Nevada and it ended up with one man dead and the other hung on a tree. It started as a