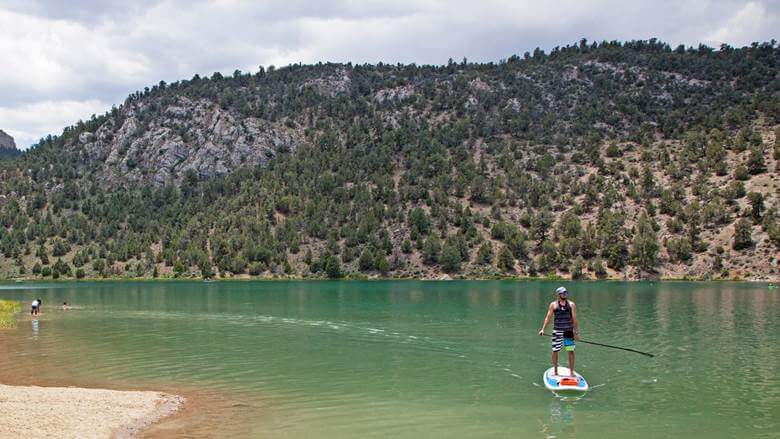 Cave Lake State Park standing at an elevation of 7,300 feet is a recreation in Ely, Nevada. Cave Lake State Park Ely occupies a total area of 4,000 acres. Cave Lake is a reservoir formed in 1932 after construction of Cave Creek Dam. Before it's expansion in 1961, the reservoir was initially used as a water supply for a ranch. Cave Lake has a 32-acre surface area. Cave lake and the enclosing hills forms what is known as cave lake state park, officiallynamed in 1973.  Cave Lake state park notonly offers beautiful scenic views but also has lots of fun activities to engage in including fishing, hiking, cross-country skiing, craw-dadding, camping, picnicking, and boating. Cave Lake is the biggest attraction in Park,it offers a great swimming spot, paddle boarding, tubing and fishing. Fishing lovers are also in for a treat during winter here, since the park offers ice fishing, because they are open all year round.

Where Is Cave Lake State Park in Nevada

Cave Lake State Park in Nevada is one of two state parks near Ely, the other being Ward Charcoal Ovens and they are all located along US 50.

Yes, Cave Lake is open for fishing. The 32-acre reservoir is very popular for brown and rainbow trout fishing, ice fishing. Cave Lake is habited by rainbow, brook, and brown trout. Also, the lake is home to cray fish considered to be very delicious.

To ensure successful fishing during winter, fishermen are advised to use both normal and colored baits. For those fishing at night, using bacon or hot dogs with a minnow trap and net is considered more resourceful. There is a fish cleaning station at the park as well.

Cave Lake State Park has two designated campgrounds, Elk Flat and Lake View Campground. The campgrounds have 17 nicely sized single-family camp sites all situated near the lake. The two campgrounds are level, however the road to the sites is unpaved. Campground facilities include a fire pit with grill, a table, and parking space.

The admission and fees to Cave Lake State Park is $5.00. The camping fee is $15.00 per night and is offered on a first-come, first-served basis. Elk Flat campground located near the Highway 93, 50 and 6 is the first on your way in the State Park and it opens early May to Mid-October. The Lake View campground is further into the State Park, near the lake and is open year-round.

Yes, Dogs are allowed at Cave Lake State Park, however they must remainon leash. The leash should be no more than 6 feet long. All pets are allowed but they should remain leashed up when outside vehicles.

The two famous trails at Cave Lake State Park are Steptoe Creek Trail and The Cave Springs Trail. Steptoe Creek Trail offers a 3-mile round trip. The trail begins at the car parking, crosses the creek on a series of foot bridges and then goes back through Success Summit Road.

The Cave Springs Trail is a 5-mile somewhat strenuous hiking. It begins at the lower parking lot and wanders through all the hills surrounding Cave Lake. Also, the park has a biking trail which is 15 kilometers of trail. You should note that, although the trails are open to everyone, motorized vehicles are not allowed on any trail.

Situated off the Great Basin Highway south of Ely, Cave Lake State Parkis about 4 hours from Las Vegas. The state park is 256.3 miles away from Las Vegas via US-93 N and NV-318.

Lake Lenore Caves State Park is a park in central Washington. The state park is located in Lenore Canyon and extends into the hills. The caves offer scenic views, and visitors can spend the best of their trip here exploring the caves. The caves were formed during the Great Missoula flood during the Ice Age. Once you have arrived at Lenore Caves State Park, from the parking lot,take the stare cases and pick the trail climbing up the valley. Here you will go through the shallow caves. The beautiful caves overlook Lake Lenore. The 1,670-acre lake was formed by the Missoula Floods. Also known as the Spokane floods, the Missoula floods happened at the end of the last Ice Age as a result of cataclysmic glacial lake outburst floods that swept periodically across Lenore Canyon down the Columbia River Gorge. As the waters rushed down, they left the openings that are now caves.

What Lake Is in Robbers Cave State Park?

Despite it’s past, the park is a paradise for outdoor lovers, hikers, cave explorers, and equestrians. Among the activities that can be enjoyed here include trout fishing, hunting, hiking, picnicking, boating, cliff climbing,and fall foliage viewing. Lodging facilities near Robbers Cave State Park include Belle Starr View Lodge, cabins, and group camping areas.

Cave Lake State Park is a charming, well maintained state park with upto 17 campsites located near the lake. If you are planning to visit this place, be sure that the park will exceed your expectations. You can engage in endlessfun recreational activities including fishing, boating, swimming, mild strenuous hiking, sledding, walking, ice fishing, kayaking, ice skating, snowshoeing, bird watching, mountain biking, and camping and more. Ely, Nevada is just 5 hours from Reno, and Joey Gilbert in his fight for Nevada has filed a class action law suit against Governor Sisolak wish to take permanent emergency powers. Nevada is beautiful and has a lot to give to its residents and visitors but only under the right leadership as Joey Gilbert says.

Wet ‘n’ Wild Las Vegas
Wet 'n' Wild Las Vegas is located in Spring Valley,Nevada. Wet ‘n’ Wild Las Vegas is located just 20 minutes away from the famous Vegas Strip and has a number of attractions including swimming pools, slides, water falls, and much more.
Cave Lake State Park
Cave Lake State Park standing at an elevation of 7,300 feet is a recreation in Ely, Nevada. Cave Lake State Park Ely occupies a total area of 4,000 acres. Cave Lake is a reservoir formed in 1932 after
Stratosphere Tower
Stratosphere Tower Las Vegas or The Strat is an iconic hotel and casino in Las Vegas. The Stratosphere Tower total height is 1,149 ft (350.2 m). It's tallest free-standing observation tower in the United States.
Peppermill Concert Hall
Peppermill Concert Hall is a hotel, casino, and a contemporary concert venue in Wendover, Nevada. Peppermill Concert Hall hosts concerts for a wide range of genres and showcases popular performers and comedians. The hall’s total worth is $21 million and it has a 1000-seat capacity
Clark County Wetlands Park
Clark County Wetlands Park is the largest park in Clark County spanning 2,900 acres along the Las Vegas Wash. Clark County Wetlands Park has two sections, one is a 210-acre wetlands nature preserve with over 3miles of flat paved trails passing through desert vegetation, cottonwood grove,
The Mob Museum
The Mob Museum Las Vegas, Nevada also known as The National Museum of Organized Crime and Law Enforcement, is a nonprofit organization dedicated to advance the public understanding of organized crime and the impact it has had on American society. The Mob Museum has 3 floors and a basement (The Underground) full of exhibits.