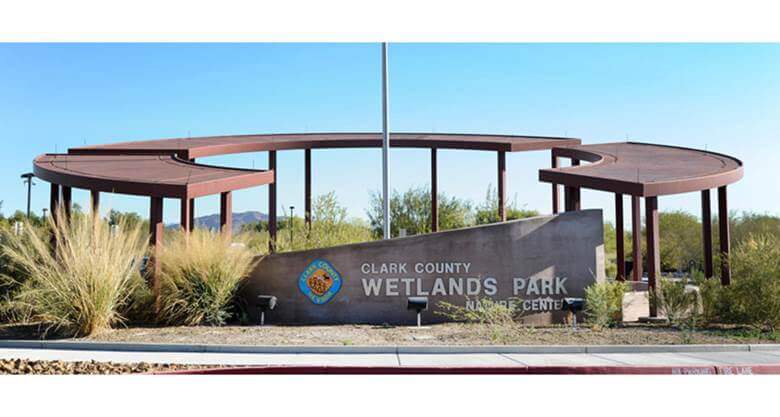 Clark County Wetlands Park is the largest park in Clark County spanning 2,900 acres along the Las Vegas Wash. Clark County Wetlands Park has two sections, one is a 210-acre wetlands nature preserve with over 3 miles of flat paved trails passing through desert vegetation, cotton wood grove, boardwalks and scenic mountain views. This section is also anchored by a 45,000 square foot nature center with lots of exhibits and programs. The other section includes a 14-mile wetlands loop trail spanning along the Las Vegas was emptying into Lake Las Vegas. Most of the trails/paths on this section are paved, 11.5 miles out of 14 miles, which makes it the most preferable spot forphysical exercise like a run or walk.

Clark County Wetlands Park is located on the east side of theLas Vegas valley in Whitney, Nevada.

Yes, Clark County Wetlands Park is open every day from dawnto dusk. All trails and trail heads are open same time. The nature store is temporary closed and will re-open this Saturday April 17, 2020 Saturday and Sunday from 9am to 2pm. The Auditorium is open Tuesday to Sunday 9am to 2pm. However, the Exhibit gallery, picnic cafe is closed until further notice due to coronavirus.

The inception of Clark County Wetlands Park was done in 1991when Bond issue passed for development of the park. The park’s plan was to construct a system of trails, a visitor center, interpretive exhibits, and picnic areas, as well as 15 erosion control structures. By 1999, the project was completed.

In 1999, Clark County Wetlands Park was first opened to the public. In 1999, the park did the first ever guided school field trip with Mabel Hoggard Elementary school students. In 2001, nature trails opened. Bostick interpretive area was opened in 2006, the sunrise trail head was openedin 2007, neighborhood park play area was installed in 2008, and the mitigation wetlands were completed in 2009. From 2012-2015 improvements were made to the park and more trailheads were completed.

Yes, Clark County Wetlands Park is free to visit. The wetlands park has a 210-acre nature preserve with activities for all ages suchas walking and biking trails.

Wetlands Park 2021 spring programs will begin in April 2021. The park offers in-person guided walks and virtual programs for kids during this time. The park offers 1 hour educational and recreational programs. The programs main aim is connecting people with nature. To attain this goal, the park has installed amazing resources that benefit not only the visitors but also the wildlife. Note that the programs are charged, and this fee goes to supporting the continued park development.

How Far Is Clark County Wetlands Park Las Vegas From The Vegas Strip?

Wetlands Nature Preserve Las Vegas is located at the heart ofthe Clark County Wetlands Park. The nature preserve is 210 acres in size andhas three distinct habitats and 3+ miles of paved and unpaved trails. The nature preserve was developed to help protect wildlife and at the same time offer the people around a natural get away from the city.

Clark County Wetlands Park map with all trails, trailheads, and amenities can be accessed here https://www.clarkcountynv.gov/Parks%20&%20Recreation/Wetlands%20Park/Maps/wetlands-overview-map.pdf?t=1612314516397

Clark County Wetlands Park is your spot when you want to escape into nature. The park has a myriad option to be one with nature. You can take walks, hike, ang jog along paved trails. Amenities in the Wetlands Park Nature Center include the auditorium where the park's movie plays nonstop, the exhibit hall with interactive displays, and the Café. The most scenic areas that you don’t want to miss during your visit at the par are the big bridge, bird blind, boardwalk, the Vem's pond island, boardwalk & turtle pond, and the cottonwood grove. The people of Whitney, Nevada as Joey Gilbert would sayare very lucky. They have a perfect spot to get away from all the madness out there, clear their minds and get to enjoy what nature has to offer.

Wet ‘n’ Wild Las Vegas
Wet 'n' Wild Las Vegas is located in Spring Valley,Nevada. Wet ‘n’ Wild Las Vegas is located just 20 minutes away from the famous Vegas Strip and has a number of attractions including swimming pools, slides, water falls, and much more.
The Hanging Tree
The Hanging Tree is an infamous tree where Adam Uber was hung. The story goes that in 1987, a crime occurred in Genoa, Nevada and it ended up with one man dead and the other hung on a tree. It started as a
Las Vegas Motor Speedway
The Speedway track length is 1.5 miles equivalent to 2.4 kilometers. This is the length used by NASCAR and IRL racing since 1996. However, in 2011 the IndyCar remeasured the Motor Speedway length and concluded it was a bit bigger,
Liberace Museum Collection
Liberace Museum Collection was a private museum collection owned by Liberace Foundation. The Liberace Foundation was founded in 1976 by Liberace himself. Władziu Valentino Liberace is a famous American pianist, singer, and actor born in May 16, 1919 and died in 1987
Spooner Lake
Spooner Lake Tahoe has an extensive recreational and natural oasis, the Spooner Back Country. The Back Country is surrounded by more than 12,000 acres of forest. It has a 5-mile hiking, mountain biking, and equestrian trails.
Colorado River Laughlin, NV
Colorado River tributaries in the North are Green, Gunnison, and San Juan, and they deliver 9million acre feet of water into the River.