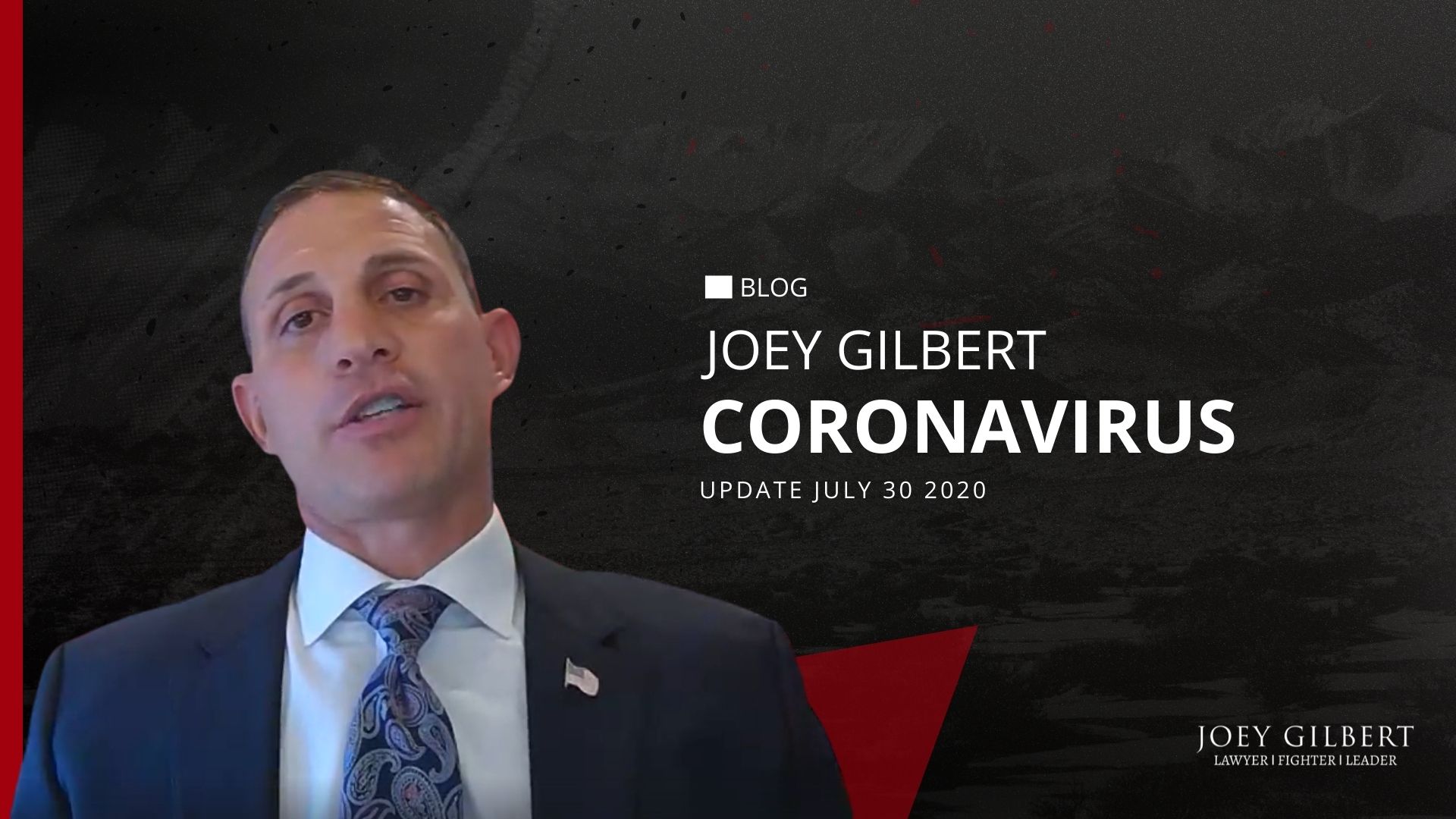 I really want to take some time and kind of walk us back through, you know, how we got where we are and what we have really done since all this insanity started taking place back in end of March, for me, mid-March my father was diagnosed with coronavirus I believe March 23rd and a lot of you people out there like to challenge my experience and want to tell me I don’t know anything. I just want to set the record straight on a couple of things. I have personally seen over 70 maybe 75 people benefit immensely from a medication that has created a lot of controversy. I’m not even going to say it because I found out that’s how they are banning me. My posts have been banned by social media just because I mentioned Hydroxychloroquine. I even stopped including the name in my text. I just referred to it as the medication. That’s how bad it got guys.

So, what I wanted to do is kind of reset the stage for everyone and remind us why we are here. What have we really done and what are we going to do to get out of this jam. I have never seen such a lack of leadership, such a lack of decisive action, such a lack of proactivity towards something that we now have easily identified. We know what it is, we know how to defeat it, we know who we need to protect, we know who it affects, yet we are still playing these games.

You know what I think is funny. I was going through my notes, and I was asking myself, how did this plan start with all kinds of stuff. It started with me realizing Sandoz and Bayer and other big companies donated over 31 million doses of a certain medication (hydroxychloroquine). According to Galford (2020), hydroxychloroquine flooded the Strategic National Stockpile as a potential treatment for coronavirus all thanks to 30 million dose donations from Sandoz and another 1 million dose donations from Bayer Pharmaceuticals in April 2020. During this time, both hydroxychloroquine sulfate and chloroquine phosphate received authorization for emergency use from U.S Food and Drug Administration (FDA).

Stuff is getting crazy, this is April 8th they have recognized based on the trials and success of this medication in different countries like South Korea, Spain, and France, and many other places that when used early on in what is known as the therapeutic use window it resulted in 80 to 90 percent less hospitalizations. If you are not hospitalized, clearly you don’t die. So, again you guys always trying to challenge me and change the words. If there is 80 to 90 less hospitalizations then there is 80 to 90 percent less deaths. I will just go ahead and state that, you can go ahead and challenge me.

So, you know we pulled this things and the most important thing I don’t think people realize is that this medication we have talked about so much in my live videos is regarding a malaria medication that has been around 70 years, in fact a foresight, Dr James, a friend of mine who was a major in Vietnam in 1970-71 where they put all 523 American troops on this particular medication, said to me, guess how many of those soldiers we sent home for heart problems, heart arrythmia, it a big fat goose egg, it was zero.

Why do I bring this up? I bring this up because there has been lots of attention given now to this particular medication(hydroxychloroquine) and here is a report by a virology Journal stating that chloroquine has strong antiviral effects on SARS-CoV infection of primate cells, and the inhibitory effects are observed when the cells are treated with the drug either before or after exposure to the virus, suggesting both prophylactic and therapeutic advantage (Vincent, Bergeron, Benjannet, Erickson, Rollin, Ksiazek, Seidah, & Nichol, 2005). So, I think that it’s less important because it is part of preventing infection and spread, don’t you think we would want to use that as much as possible? And we would want our doctors to be the ones prescribing that? So, I wanted to do this because what do vaccines do? Vaccines prevent the infection and spread of the disease. So, if Dr Fauci knows everything said back in 2005 that

“Chloroquine is effective in preventing the spread of SARS CoV in cell culture. Favorable inhibition of virus spread was observed when the cells were either treated with chloroquine prior to or after SARS CoV infection. In addition, the indirect immunofluorescence assay described herein represents a simple and rapid method for screening SARS-CoV antiviral compounds” (Vincent et al., 2005).

I just want again to say that this is a medication we have known about since 2005, why is it being hidden from the American people, what is going on? The National Strategic Stockpile guys. I just want you guys to know, there more medication there than we will probably ever use, as a matter of fact they are saying it's going to expire on the shelves because it’s not going to be used.

One more thing I want to bring up because I thought it was interesting. So, you heard a group of doctors went on the supreme court steps in Washington DC. They were on the steps of the supreme court, they were medical doctors, board certified medical doctors, and since they appeared, they have been censored, their videos have been removed from YouTube, Twitter, Google, and Facebook. My comments were also deleted, my own videos I produced, the videos I shared of these doctors, and again guys, I’m going to say this one more time, when this virus was breaking out in China, they were not locking up doctors and limiting their speech and preventing them from discussing the coronavirus on social media or even all with anybody. isn’t that a little weird? Why is there this big big push against a medication that has been around this long. For those who like to attack me about this whole thing saying that its unproven, I will slap you with this one “Cuomo admits hydroxychloroquine works. Wants to lift restrictions.” Andrew Cuomo, New York Governor said that the antimalarial drug showed anecdotal evidence of alleviating coronavirus and he wants more for his state (Miguel, 2020).

Remember this? Does that hurt, does that sting a little for you completely just……, I don’t even know what to call you. For those of you out there that are truly insane, Governor Cuomo who hates Trump very verifiably would do anything like seed nursing homes with coronavirus patients so that 50 percent of the deaths in New York and New Jersey came from nursing homes a place we already knew we wanted to protect, but genius boy over there thought that we should send COVID-19 patients to him. Then when he realized the kind of sling he was in, he had to ask the president to lift the restrictions on hydroxychloroquine. But it gets better, why does it get better? Because we have another article. It might hurt you a little. Guys see this one, this is back in April. In April 7th we knew this medication was working and saving lives. Karen Whitsett a Michigan democratic state representative told FOX News that the controversial drug hydroxychloroquine stopped her coronavirus symptoms (Martin, 2020). That happened within hours. I can’t understand, for you jumping on the pages calling people rude and stupid and ignorant and witch doctors, you don’t have to take it, no one’s forcing you to take it. You can all see the facts. I’m not going to stop talking because too many people are dying while we play BS games of nonsense, they are games of nonsense and they are not fair and they are not right and they are not going to keep happening. As long as I keep talking, you guys will keep getting informed. For more information on my fight against unlawful restrictions and sanctions visit joeygilbertlaw.com.

The Mob Museum
The Mob Museum Las Vegas, Nevada also known as The National Museum of Organized Crime and Law Enforcement, is a nonprofit organization dedicated to advance the public understanding of organized crime and the impact it has had on American society. The Mob Museum has 3 floors and a basement (The Underground) full of exhibits.
Sahara Las Vegas
Sahara Vegas is a hotel with 1,616 rooms, full-service spa, and three outdoor pools, and a casino. It has three distinct towers namely, Alexandria tower, Marra Tower, and Blanca Tower.
South Point Hotel Casino & Spa
South Point Hotel, Casino and Spa is 24-story 3.5-star sparesort in Las Vegas area, Nevada. The 1,350-room casino was opened in November 2005 under the name South Coast
Cowabunga Bay Water Park
Cowabunga Bay Water Park is a 23-acre surf-retro-themed water park with over 25 slides, wave pools, and other attractions. Cowabunga Bay water park is a 1960s beach-themed park opened in
Fremont Street Experience
The centerpiece of Fremont Street Experience is Viva Vision, world’s largest video screen. Viva Vision is 1,375 feet long and is suspended 90 feet above the pedestrian mall. It has a total 49.3 million LED lights and a 600,000-watt sound system.
Great Basin National Park
Great Basin National Park Nevada is a recreationalist’s paradise in the state of Nevada. The Great Basin National Park has elevations from 5,000 to 13,000 feet with terrains showered withflowing watercourses, lakes, lone glacier, and bristlecone pine trees.