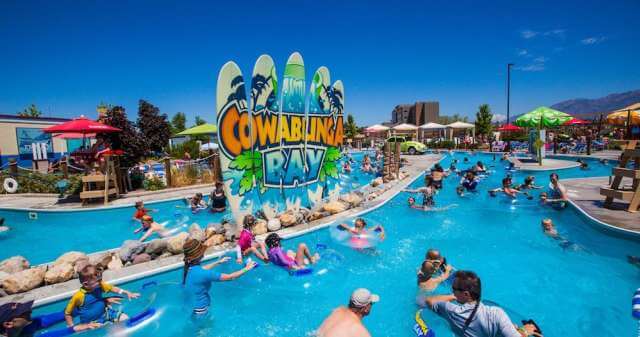 Things to Do at Cowabunga Bay Water Park Las Vegas

All the water slides are so much fun and thrilling. Beach Blanket Banzai includes a raft for four people that is carried up to a height of 60' and then released to race over 600 feet of 180 degrees turns, s curves, dips, and drops. The riders should be at least 36'' and all four should add upto 7770 pounds in weight. The breaker 1-9 is a slip, slide, twist, turn, drop, and scream high-speed thrilling water slide. The maximum weight for single tubes is 260 pounds and for double tubes is 440 pounds. The downhill doggers isa kid sized surfin' version four lanes with a splash-down finale. Point Panic slide is a fully enclosed pitch-black water slide. Riders use tubes to run down the lighted tube. Other slides include rock-a-hoola, squigglers, surf-a-go-go,surfin’ USA, wild surf, and zuma zooma.

Cowabunga bay waterpark has a shop or trader store on site.The store has every you will need to keep your cool look at the park. The items available range from sun block, towels, sun glasses, treats, flip flops, and sundries among others.

Cowabunga Bay Water Park has season passes, the standard season pass, and the plus pass. The two season passes has discounts on merchandise, food, and cabanas.

How Big Is the Water Park Cowabunga Bay?

How Far Is Cowabunga Bay Vegas From the Vegas Strip?

Cowabunga bay water park is 23 minutes or 10.9 miles from the Vegas Strip via W Flamingo Rd and I-515 S.

Summer Nights during last 3 hours of operations is $21.95.

For all those looking to cool down and embark on an electrifying adventure in Las Vegas this summer, Cowabunga Bay Water Park is the place to be. Cowabunga Bay Nevada features more than 25 water slides, and has awesome beaches, pools, bays, and rivers. When Joey Gilbert files a law suit to have the state of Nevada open, he wants Cowabunga Bay Water Park in Henderson and all parks in the state to be fully open and same case for the hotels, casinos, massage parlors, and any other closed businesses. Closing these businesses down can have a very negative impact on the lives of the residents and the state’s economy as well.

Spring Creek Marina Park
Spring Creek Marina Park is a park surrounding the beautiful Spring Creek Lake. The Marina Park is 8-acres surrounding 32-acre Spring Creek fed lake.
Liberace Museum Collection
Liberace Museum Collection was a private museum collection owned by Liberace Foundation. The Liberace Foundation was founded in 1976 by Liberace himself. Władziu Valentino Liberace is a famous American pianist, singer, and actor born in May 16, 1919 and died in 1987
Sunrise Mountain
Sunrise Mountain is a rocky mountain in Sunrise Manor, Clark County, Nevada. Sunrise Manor is an unincorporated town in Clark County, Nevada just next to Las Vegas and Nellis Air Force Base. Sunrise Mountain has an elevation of 1025m. At the base of Sunrise Mountain is the Vishnu Schist, some of the oldestrocks in North America.
Las Vegas Motor Speedway
The Speedway track length is 1.5 miles equivalent to 2.4 kilometers. This is the length used by NASCAR and IRL racing since 1996. However, in 2011 the IndyCar remeasured the Motor Speedway length and concluded it was a bit bigger,
The Mob Museum
The Mob Museum Las Vegas, Nevada also known as The National Museum of Organized Crime and Law Enforcement, is a nonprofit organization dedicated to advance the public understanding of organized crime and the impact it has had on American society. The Mob Museum has 3 floors and a basement (The Underground) full of exhibits.
Peppermill Concert Hall
Peppermill Concert Hall is a hotel, casino, and a contemporary concert venue in Wendover, Nevada. Peppermill Concert Hall hosts concerts for a wide range of genres and showcases popular performers and comedians. The hall’s total worth is $21 million and it has a 1000-seat capacity