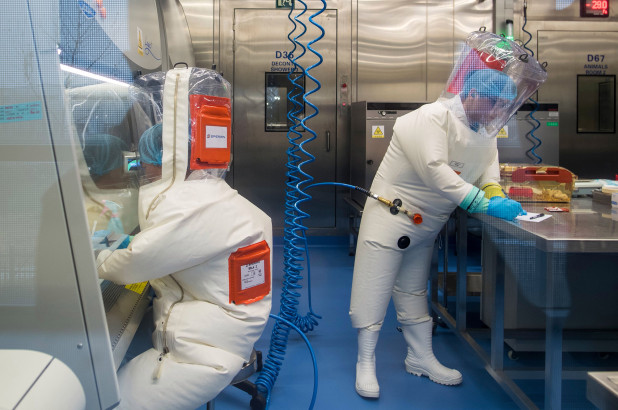 A bombshell new study claims to have proof that Chinese scientists created COVID-19 in a lab and then tried to reverse-engineer versions of the virus to make it look like it evolved naturally from bats.

The study concludes: “the likelihood of it being the result of natural processes is very small.” The virus is still killing 12,000 people a day around the world.

Dalgleish is a London oncology professor known for breakthrough work on a vaccine for HIV. Sørensen is a virologist and chair of a pharmaceutical company, Immunor, which developed a coronavirus vaccine candidate called Biovacc-19. Dalgleish also has a financial stake in that company.

It was during their COVID-19 vaccine research that the pair came across “unique fingerprints” indicating the virus didn’t come from nature, they said. The telltale clue: a rare finding in the COVID-carrying virus of a row of four amino acids, which give off a positive charge and bond to negative human cells.

“The laws of physics mean that you cannot have four positively charged amino acids in a row,” Dalgleish told the Daily Mail. “The only way you can get this is if you artificially manufacture it.”

They also tracked published Chinese research, some done working with American universities, to show how the tools to create the virus were allegedly built. A good part of the work reviewed involved “gain of function” research, which involves manipulating natural viruses in a lab to make them more infectious, allowing scientists to study their potential effect on humans.

The US put a moratorium on such research in 2014. But it’s impossible to know if $600,000 in funding for medical research in China was used for gain of function research, Dr. Anthony Fauci told Congress last week.

“A natural virus pandemic would be expected to mutate gradually and become more infectious but less pathogenic, which is what many expected with the COVID-19 pandemic but which does not appear to have happened,” the scientists wrote.

News of the study comes amid renewed interest in COVID-19’s origins, which had long been proclaimed to have made the jump from bats to humans at a wet market in China.

Nevada Museum of Art
Nevada Museum of Art (NMA) is an art Museum in downtown Reno, Nevada. This is the only American Alliance of Museums accredited art museum in Nevada, and has collection of about 2000 pieces of 19th through 21st-century artwork.
Colorado River Laughlin, NV
Colorado River tributaries in the North are Green, Gunnison, and San Juan, and they deliver 9million acre feet of water into the River.
Fremont Street Experience
The centerpiece of Fremont Street Experience is Viva Vision, world’s largest video screen. Viva Vision is 1,375 feet long and is suspended 90 feet above the pedestrian mall. It has a total 49.3 million LED lights and a 600,000-watt sound system.
Wet ‘n’ Wild Las Vegas
Wet 'n' Wild Las Vegas is located in Spring Valley,Nevada. Wet ‘n’ Wild Las Vegas is located just 20 minutes away from the famous Vegas Strip and has a number of attractions including swimming pools, slides, water falls, and much more.
Lion Habitat Ranch, NV
Lion Habitat Ranch was started in 1989 as a nonprofit sanctuary dedicated to take care of lions, educate people about animals in the conservation, and illustrating the importance of animal conservation.
Liberace Museum Collection
Liberace Museum Collection was a private museum collection owned by Liberace Foundation. The Liberace Foundation was founded in 1976 by Liberace himself. Władziu Valentino Liberace is a famous American pianist, singer, and actor born in May 16, 1919 and died in 1987