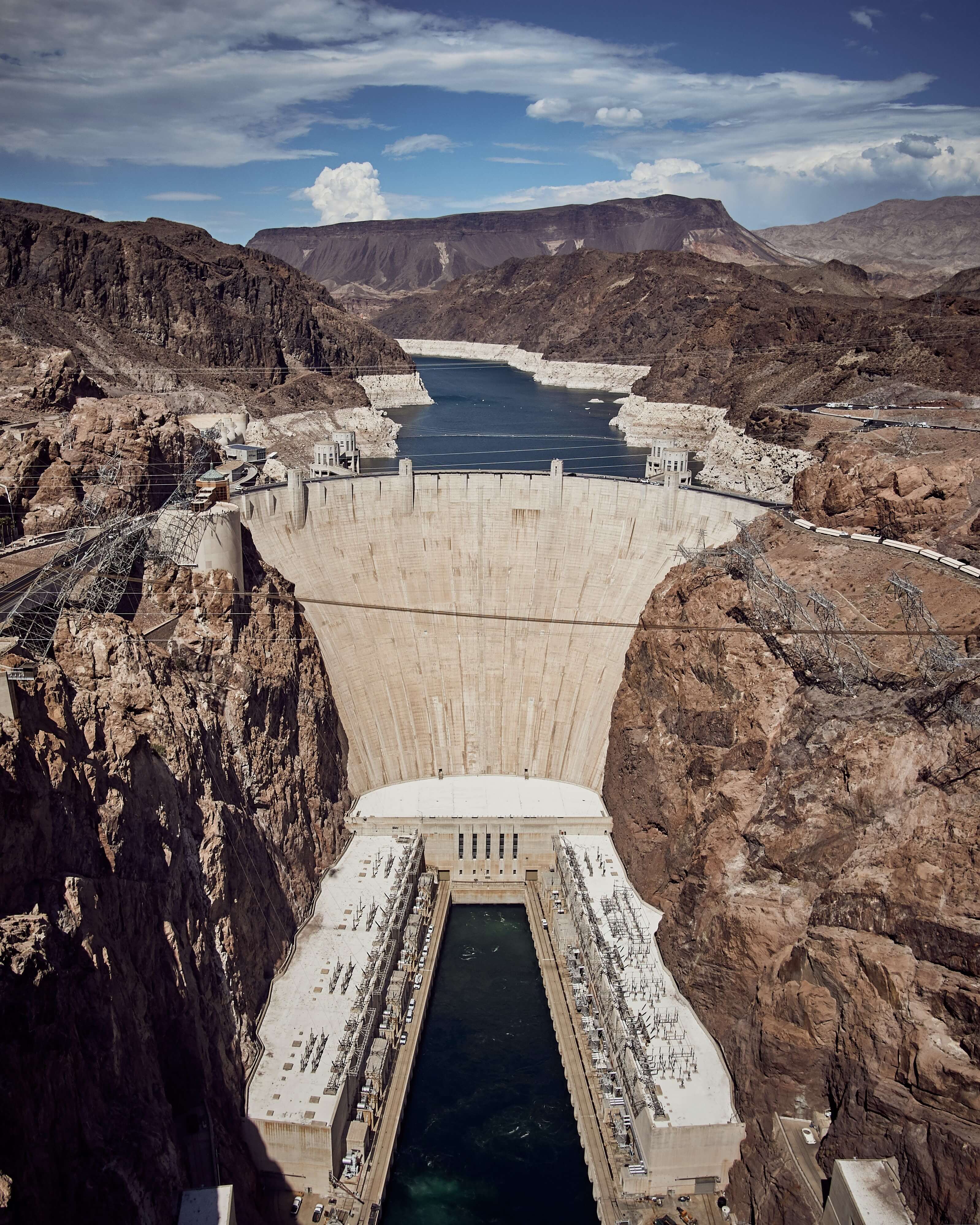 Hoover Dam was built as a means to tame the Colorado River and plan toprovide water and hydroelectric power in Southwestern United States. Also, the dam is used as a source of irrigation water by farmers, and before it was built, farmers used to divert the Colorado River via canals to get irrigation water, but this resulted to the river breaking through those canals. As aresult, the U. S Bureau of Reclamation took over the role of controlling the waters and the plan was to construct a huge reservoir. Hoover Dam is also a major landmark and tourist attraction that receives millions of visitors from across the United States and the whole world annually.

Where is the Hoover Dam?

How Far is Hoover Dam From Las Vegas?

The distance fromLas Vegas to Hoover Dam is 30 miles. Hoover Dam is about 20 minutes southwest of Las Vegas. It’s less than an hour away from Las Vegas. For those visiting, Hoover Dam tours from Las Vegas, can be done by guided bus tours from the Las Vegas Strip. It's a short and fun trip since you get to enjoy not only the iconic dam, but also the Grand Canyon and other amazing sights. Viewing the dam is free, the only time you are required to pay is when you want to see the mega generators. They are located on the inside and you will have to get through thelobby where you pay. You can also view the dam in full from Hoover Dam bridge.The Hoover Dam bridge was constructed as a part of the new alignment of U.SHighway 93, and it offers an amazing view of the dam.

While visiting the Hoover Dam, you can also enjoy someother activities here. You can see the Winged Figures of the Republic Statues, a sculpture of massive winged angels made from bronze. You can also visit Hemenway Park, Boulder City, a large open ground facing Lake Mead. The Hemenway Park also offers a beautiful view of grazing big horn sheep. Boulder City Hoover Dam Museum is also an important site to visit. It is located in downtown Boulder City, and here youget to understand the Hoover Dam much better. The museum carries rich history from the era of building the dam. So, you will get to know everything that happened during the construction of the dam. Nevada State Railroad Museum is also a worthy stop over while visiting the Hoover Dam. You can enjoy breathtaking rail rides and have your mind brown by the immense knowledge preserved in this museum. The best time to visit here is during Christmas, the decorations will amaze you.

Also referred to as the Mike O'Callaghan–Pat Tillman Memorial Bridge or Hoover Dam Bypass is an arch bridge crossing over the Colorado River. The Hoover Dam bridge is located 48km southeast Las Vegas. The Hoover Dam bridge project was meant to help reroute US Route 93 that was initially passing over the top of the Hoover Dam. The high was thought of being dangerous because of the high traffic going through the area. The project was completed in 2020. The Hoover Dam Bridge was a joint project between Arizona and Nevada. Upon its completion, the bridge became the first concrete-steel composite arch bridge in the whole of the United States. It was named after the then governor of the state of Nevada, Mike O'Callaghan–Pat Tillman. Other than being a magnificent site itself, the bridge offers a wide and amazing view over the Colorado River. You can also view the Hoover Dam in full from the bridge. The Hoover Dam bridge was constructed as a part of the new alignment of U.S Highway 93, and it offers an amazing view of the dam.

The state of Nevada is home to the most iconic dam, Hoover Dam, that’s why it’s usually referred to as Hoover Dam Nevada. It is located in Boulder City, Nevada, but it serves millions of other people across the state. Its power supply can serve up to 1.3 million people and it also feeds various cities with clean water.

Hoover Dam area is currently open and you can visit between 5am and 9pm. However, the inside of Hoover Dam is closed for maintenance from January 25th to February 15th 2021. The access hours for the powerplant are from 9am to 5pm. Hoover Dam is only closed during Christmas and Thanksgiving. You might want to arrive early since tickets are not sold after 3:45pm.

When Was the Hoover Dam Built?

In 1905, Hoover Dam broke after farmers tried to divert one of the largest rivers in the US, Colorado River, for irrigation. Consequently, the inland Salton sea was created and since the farmers could not control this massive water mass anymore, the U.S Bureau of Reclamation took over. Their job was to tame the river and the best way was creating a massive reservoir. The 60-storey arch dam construction began in 1931 and went on through 1935. The construction turned difficult as workers had to blast rocks, and work in tunnels that were choked with carbon monoxide and dust. By 1932, two tunnels were complete and they helped rechanneling Colorado River. Then the workers encountered yet another challenge since they had to clear walls for the dam. Some of them fell from heights of up to 800 ft. or were injured from work equipment’s falling from above them. In 1935, despite the challenges, the dam was completed and was commemorated by President Franklin Roosevelt. Over 1 million homes are received lighting and over a million acres of land got irrigation water from the dam.

How Many People Died Building The Hooverdam?

According to official records, the total number of people who died while building Hoover Dam is 96. The deaths or fatalities are classified as industrial fatalities and they emanated from falls from canyon walls, truck accidents, being hit by falling rocks, being hit by construction equipment’s like hammers, drowning, and blasting among others.

Is it Huber Dam or Hoover Dam that is Correct?

The correct name is Hoover Dam not huber dam. To pronounce the name Hoover Dam, you will need to separate the name into sounds, then you can easily learn how to produce the sound without difficulties. Huber would be a surname of German origin.

Hoover Dam website is https://www.usbr.gov/lc/hooverdam/. On this website, you get to learn more about the dam. You also get a chance to learn about opening and closing hours, closed days, tours, ticket prices, get contact information, and you can be updated on the upcoming events.

Hoover Dam on the Colorado River is one site you cannot miss when you are visiting the state of Nevada. If you are driving, you don’t have to worry since there's a parking garage with a fee of $10. Hoover Dam is Joey Gilbert's Boulder City, NV favorite attraction. The visit is worth it.

Las Vegas Motor Speedway
The Speedway track length is 1.5 miles equivalent to 2.4 kilometers. This is the length used by NASCAR and IRL racing since 1996. However, in 2011 the IndyCar remeasured the Motor Speedway length and concluded it was a bit bigger,
Lion Habitat Ranch, NV
Lion Habitat Ranch was started in 1989 as a nonprofit sanctuary dedicated to take care of lions, educate people about animals in the conservation, and illustrating the importance of animal conservation.
Spring Creek Marina Park
Spring Creek Marina Park is a park surrounding the beautiful Spring Creek Lake. The Marina Park is 8-acres surrounding 32-acre Spring Creek fed lake.
Ruby Mountains
Ruby Mountains are mountain ranges and part of a group of metamorphic and igneous rocks that were once buried deep within the Earth’s crust. Ruby Mountain near Elko, Nevada was formed about 540 million years ago based on the age of the rocks forming the mountain. Ruby Mountains reach an elevation of 11,387 feet.
Sahara Las Vegas
Sahara Vegas is a hotel with 1,616 rooms, full-service spa, and three outdoor pools, and a casino. It has three distinct towers namely, Alexandria tower, Marra Tower, and Blanca Tower.
Fremont Street Experience
The centerpiece of Fremont Street Experience is Viva Vision, world’s largest video screen. Viva Vision is 1,375 feet long and is suspended 90 feet above the pedestrian mall. It has a total 49.3 million LED lights and a 600,000-watt sound system.