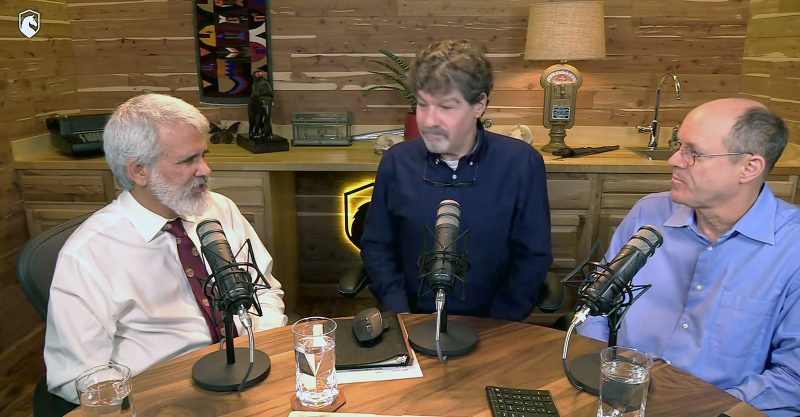 The Defender is experiencing censorship on many social channels. Be sure to stay in touch with the news that matters by subscribing to our top news of the day. It's free.

In this short outtake from the full podcast, Malone, Weinstein and tech entrepreneur Steve Kirsch touch on the implications of the controversial Japanese Pfizer biodistribution study. The study was made public earlier this month by Dr. Byram Bridle, a viral immunologist.

They also discuss the lack of proper animal studies for the new mRNA vaccines, and the theory, espoused by virologist Geert Vanden Bossche, Ph.D., that mass vaccination with the mRNA vaccines could produce ever more transmissible and potentially deadly variants.

As The Defender reported June 3, Bridle received a copy of a Japanese biodistribution study — which had been kept from the public — as a result of a freedom of information request made to the Japanese government for Pfizer data.

Prior to the study’s disclosure, the public was led to believe by regulators and vaccine developers that the spike protein produced by mRNA COVID vaccines stayed in the shoulder where it was injected and was not biologically active — even though regulators around the world had a copy of the study which showed otherwise.

The biodistribution study obtained by Bridle showed lipid nanoparticles from the vaccine did not stay in the deltoid muscle where they were injected as the vaccine’s developers claimed would happen, but circulated throughout the body and accumulated in large concentrations in organs and tissues, including the spleen, bone marrow, liver, adrenal glands and  — in “quite high concentrations” — in the ovaries.

The mRNA — or messenger RNA — is what tells the body to manufacture the spike protein. The lipid nanoparticles are like the “boxes” the mRNA is shipped in, according to Malone. “If you find lipid nanoparticles in an organ or tissue, that tells you the drug got to that location,” Malone explained.

According to the data in the Japanese study, lipid nanoparticles were found in the whole blood circulating throughout the body within four hours, and then settled in large concentrations in the ovaries, bone marrow and lymph nodes.

Malone said there needed to be monitoring of vaccine recipients for leukemia and lymphomas as there were concentrations of lipid nanoparticles in the bone marrow and lymph nodes. But those signals often don’t show up for six months to three or nine years down the road, he said.

Usually, signals like this are picked up in animal studies and long-term clinical trials, but this didn’t happen with mRNA vaccines, Malone said.

Malone said there are two adverse event signals that are becoming apparent to the U.S. Food and Drug Administration (FDA). One of them is thrombocytopenia — not having enough platelets, which are manufactured in the bone marrow. The other is reactivation of latent viruses.

Malone found the ovarian signal perplexing because there is no accumulation in the testes.

Malone said the original data packages contained this biodistribution information. “This data has been out there a long time” within the protected, non-disclosed, purview of the regulators across the world, he said.

In fact, Malone was one of many scientists to warn the FDA about the dangers of the free spike protein.

Malone suggested autoimmune issues may be related to free-circulating spike protein which developers assured would not happen. To pick up autoimmune issues, a 2- to 3- year follow-up period in phase 3 patients would be required to monitor for potential autoimmune consequences from vaccines — but that monitoring didn’t happen with the Pfizer and Moderna vaccines.

Pfizer and Moderna also didn’t conduct proper animal studies, Weinstein said. What the animal models give us is a signal that alerts us to what we need to follow up on in humans.

“We’ve got very alarming short-term stuff. We’ve got short-term stuff that is alarming on the basis of where we find these lipids, where we find the spike proteins — those things are reasons for concern because it wasn’t supposed to be this way. We’ve also got an alarming signal in terms of the hazards and deaths or the harms and the deaths that are reported in the system and there are reasons to think they are dramatic under-reports.”

Vaden Bossche got it right

One of the potential harms from the vaccines, Weinstein said, was made famous by Vanden Bossche, a vaccinologist who worked with GSK Biologicals, Novartis Vaccines, Solvay Biologicals, Bill & Melinda Gates Foundation’s Global Health Discovery team in Seattle, and Global Alliance for Vaccines and Immunization in Geneva.

Earlier this year, Vanden Bossche put out a call to the World Health Organization, supported by a 12-page document, that described the “uncontrollable monster” that a global mass vaccination campaign could potentially unleash.

Vanden Bossche said a combination of lockdowns, and extreme selection pressure on the virus induced by the intense global mass vaccination program, might diminish the number of cases, hospitalizations and deaths in the short-term, but ultimately, will induce the creation of more mutants of concern. This is what Vanden Bossche calls “immune escape” (i.e. incomplete sterilization of the virus by the human immune system, even following vaccine administration).

Immune escape will in turn trigger vaccine companies to further refine vaccines that will add, not reduce, the selection pressure, producing ever more transmissible and potentially deadly variants.

The selection pressure will cause greater convergence in mutations that affect the critical spike protein of the virus that is responsible for breaking through the mucosal surfaces of our airways, the route used by the virus to enter the human body.

The virus will effectively outsmart the highly specific antigen-based vaccines being used and tweaked, depending on the circulating variants. All of this could lead to a hockey stick-like increase in serious and potentially lethal cases — in effect, an out-of-control pandemic.

“Vanden Bossche’s concern is not theoretical. It is real and we have the data. We’re stuck with this virus or its downstream variants pretty much for the rest of our lives and it’s going to become more like the flu. We will have continuing evolution and circulation of variants, and that is an escape.”

Stratosphere Tower
Stratosphere Tower Las Vegas or The Strat is an iconic hotel and casino in Las Vegas. The Stratosphere Tower total height is 1,149 ft (350.2 m). It's tallest free-standing observation tower in the United States.
The Hanging Tree
The Hanging Tree is an infamous tree where Adam Uber was hung. The story goes that in 1987, a crime occurred in Genoa, Nevada and it ended up with one man dead and the other hung on a tree. It started as a
Sunrise Mountain
Sunrise Mountain is a rocky mountain in Sunrise Manor, Clark County, Nevada. Sunrise Manor is an unincorporated town in Clark County, Nevada just next to Las Vegas and Nellis Air Force Base. Sunrise Mountain has an elevation of 1025m. At the base of Sunrise Mountain is the Vishnu Schist, some of the oldestrocks in North America.
South Point Hotel Casino & Spa
South Point Hotel, Casino and Spa is 24-story 3.5-star sparesort in Las Vegas area, Nevada. The 1,350-room casino was opened in November 2005 under the name South Coast
Peppermill Concert Hall
Peppermill Concert Hall is a hotel, casino, and a contemporary concert venue in Wendover, Nevada. Peppermill Concert Hall hosts concerts for a wide range of genres and showcases popular performers and comedians. The hall’s total worth is $21 million and it has a 1000-seat capacity
Fremont Street Experience
The centerpiece of Fremont Street Experience is Viva Vision, world’s largest video screen. Viva Vision is 1,375 feet long and is suspended 90 feet above the pedestrian mall. It has a total 49.3 million LED lights and a 600,000-watt sound system.