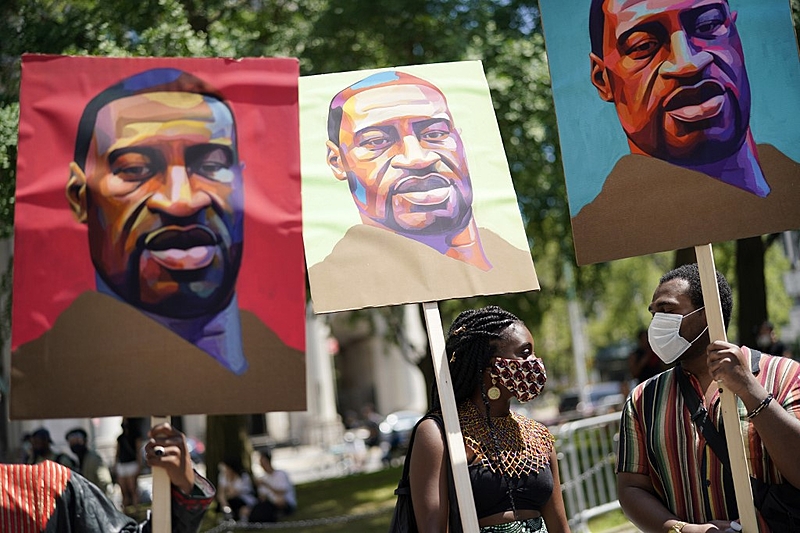 What was done to George Floyd was absolute cruelty and murder.

The black community is long overdue to be treated with the same respect and dignity as everyone else. I do think sometimes police go a little far, I think sometimes they take their authority too far, I really do.

And I want to put it out there that you have a right to protest, you have a right to demonstrate, you have a right to be mad, a right to scream in the cop’s face, and anything you need to do, but you do not have a right to touch people and to be violent, you do not have a right to burn buildings and destroy things. Everyone is out there and they are peacefully demonstrating. Don’t ruin what they stand for, don’t ruin the memory of George Floyd by going and burning buildings and looting. I saw with my own eyes white men destroying stuff here. So, don’t let this movement get high jacked by people that are just here to cause pain and division. If there’s people coming in to do damage, don’t watch them, don’t cheer them, don’t videotape them. After your protest, after your demonstration, go home to your wife, to your family, to what matters most, and um don’t break things, don’t destroy us. And since people are going out so much without observing social distancing, let the most effective Covid19 medicine be made available to the nursing homes, and to the senior citizens.

Wet ‘n’ Wild Las Vegas
Wet 'n' Wild Las Vegas is located in Spring Valley,Nevada. Wet ‘n’ Wild Las Vegas is located just 20 minutes away from the famous Vegas Strip and has a number of attractions including swimming pools, slides, water falls, and much more.
Stratosphere Tower
Stratosphere Tower Las Vegas or The Strat is an iconic hotel and casino in Las Vegas. The Stratosphere Tower total height is 1,149 ft (350.2 m). It's tallest free-standing observation tower in the United States.
Las Vegas Motor Speedway
The Speedway track length is 1.5 miles equivalent to 2.4 kilometers. This is the length used by NASCAR and IRL racing since 1996. However, in 2011 the IndyCar remeasured the Motor Speedway length and concluded it was a bit bigger,
Red Rock Casino
Red Rock Casino was opened on April 18th, 2006 after 2 years of construction from 2004. It offers supreme luxury and unprecedented accommodations
Sunrise Mountain
Sunrise Mountain is a rocky mountain in Sunrise Manor, Clark County, Nevada. Sunrise Manor is an unincorporated town in Clark County, Nevada just next to Las Vegas and Nellis Air Force Base. Sunrise Mountain has an elevation of 1025m. At the base of Sunrise Mountain is the Vishnu Schist, some of the oldestrocks in North America.
Liberace Museum Collection
Liberace Museum Collection was a private museum collection owned by Liberace Foundation. The Liberace Foundation was founded in 1976 by Liberace himself. Władziu Valentino Liberace is a famous American pianist, singer, and actor born in May 16, 1919 and died in 1987