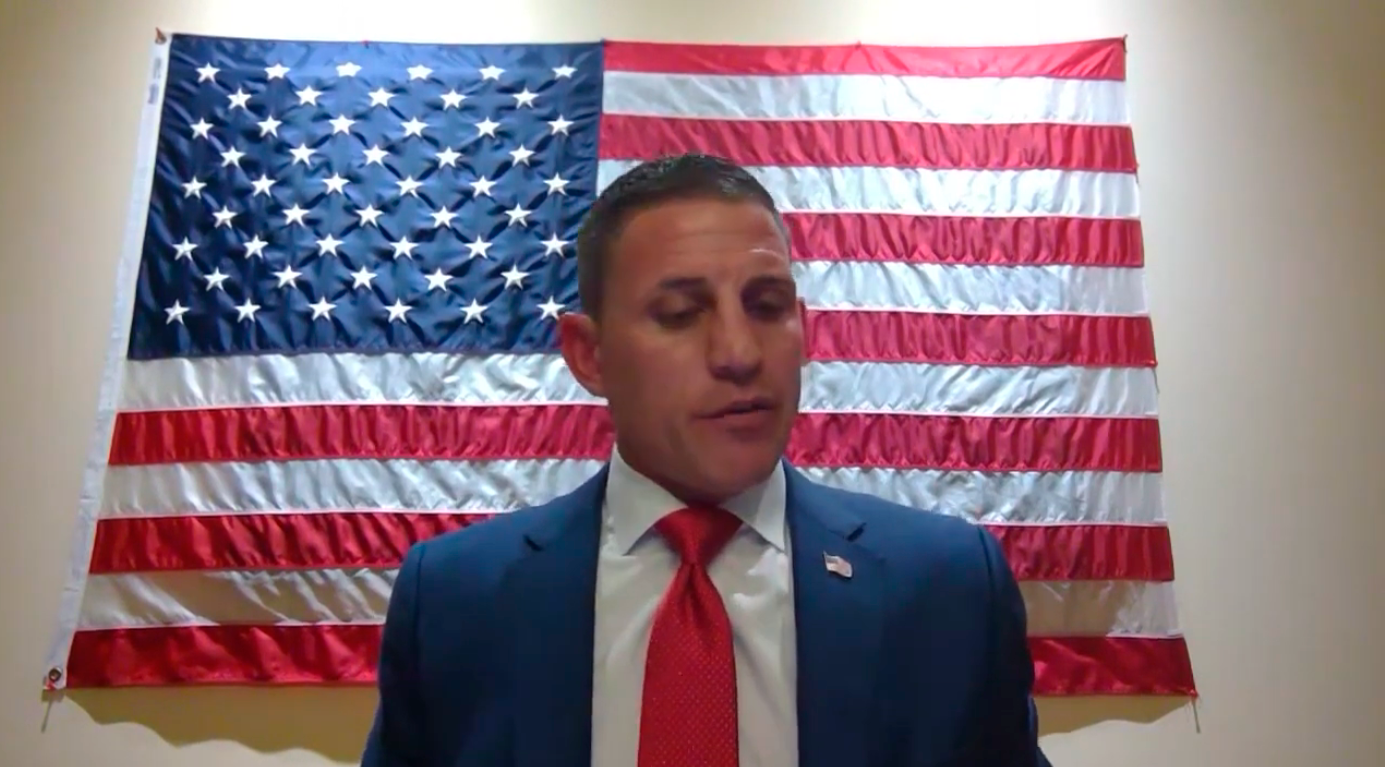 My fellow Americans, we stand today, tonight. And my fellow Nevadans at a precipice, right we stand at a precipice, we have to decide if we’re going to play this game anymore. And we shouldn’t. Our president right now is a political and geopolitical world’s worst nightmare. A true counter puncher. Promises made, promises kept. From record job groups to ending the endless wars and bringing our veterans and troops home to fixing the VA for our wonderful veterans and a trade deal after trade deal, after trade deal, after trade deal done with America first in mind. There’s nothing wrong with that, there’s nothing bad with that, and of course we got a master negotiator and businessman at the helm. That’s why it’s all happening. Jobs for minority. Every subset of America has experienced record growth and opportunity.

If you’ve had enough of this nonsense, if you’ve had enough of this Covid BS, if you are done with the insane idea of defunding police and the crime and murder of our big city and our big cities, if you want law and order and you love our law enforcement and the safety they provide, then talk to everyone you know and get loud about what’s happening in this state and in this country. And I want to say this about voting. Vote in person, don’t you dare take the risk. And you think there’s a greater risk at the polls of getting sick, come on now. Even Dr Fauchi and Dr Burke said we can vote in person safely. So, what’s really happening. All right guys, I’ve read my little statement, but let’s get in the weeds of this.

We just had our Governor go on, MSNBC of course, you know you can’t get more biased and political than that. And he called our president disgusting, reckless, and arrogant. And darn, if I didn’t think we were talking about Steve Sisolak down in Vegas in a restaurant with no mask listening to live music and all over a sudden you can’t be somewhere by your own volition and your own decision and go to a protest right. But it was okay for 30 straight nights of protesting in Las Vegas out in the streets and thousands of people, but it’s not okay to go protest or to go to an event that you care about. So, what’s with the double standards then Governor. How I didn’t see you doing this. We were having these matches and these rallies. We were having these defund the police matches. How come you weren’t out there with the mask on during your, I mean which was just beyond bizarre and a little creepy if you ask me. You don’t wear a mask to the restaurant in Vegas where you’re listening to live entertainment but you wear a mask on camera with MSBNC news in your office in Carson City and it's not politics, it’s not showmanship, it’s not just political theater because I think it is Governor.

Think what you’ve done as despicable and you my friend are a complete joke. You’re a joke. You want to know why you are a joke? Because at the end of the day, have you seen those pool parties in Vegas? So, you wear a mask on the side of the pool or you’re sitting in a chair but when you’re in the water dancing the music no mask and Clark County hospital beds haven’t hit peak capacity. The ICU units aren’t full. None of that has happened. I know it hasn’t happened because you know I’ve called the doctors, and you know just like everyone else knows. And you know the tear sheets that come out of hospitals, those are coming soon too. That’s going to be in a separate lawsuit because there’s no longer an imminent threat. There’s no longer an emergency. So, why are we here, why is the state still locked down. Why are they still playing the games with the kids? and again I want to remind everybody. There’s not one documented transmission of student to teacher infection in the modern world, in Europe, and everywhere where the schools have been open since may.

Again, I say this one last time and I hope it has helped a little bit because I know there was plenty of Nevadans that were done with it and were going to open up their bars and taverns anyway. So, I’m glad it’s going to happen here tomorrow night. But I want to say this. They are having pool parties in Wuhan China. They are back to school in Europe. No one is talking about lockdowns anymore. No, as a matter of fact they are saying the exact opposite. They’re saying that lockdowns can no longer be justified in light of what we know now about Covid19. They have said now it just disproportionately harm the youth. Our children have been disproportionately harmed by the lockdowns and you know what they say? They harm the youth and you can’t postpone youths. Our student athletes. Our kids that have been locked up away from their coaches. It’s not right, and here’s another most important part. He talks about financial cost. He condemned the obsession with cases in a contextless numbers that only panics people when we should instead be focusing on hospital strain. So, guys as you all take your own approach to this, I’m just going to ask you to use common sense and I’m going to save you this real quick. If they can fly on airplanes where they have recycled air for hours. If this virus really did what they said it would, and was as dangerous as they said it was, everyone would be dead on those planes, everyone would be dead and sick and hurting, and dying and full of disease, if it was nearly as deadly as they said it was. But it hasn’t happened and in fact, in talking with administrators here in town, tones of workers were let go, people were furloughed. I said this time and time again. And we never even came close to capacity in our hospitals, let alone ICU beds, and when they talk about ICU bed strains, they don’t talk about all the other normal everyday things that are getting people in the hospitals.

I want to say something really important from a medical perspective. This is the chief medical doctor in Ireland and I’m just going here because they are about three months ahead of us and you think that the governor is using the best medical science. He’d be referencing stuff like this, but he’s not, instead, he’s hiding behind positive test numbers, which he knows don’t mean jack. They don’t mean a thing. I want to see everybody in these comments here, sound off again guys it is working. Get loud if you think this is bullshit. Your kids are locked in home distance learning, okay. My nephews are having a hell of a time, trying to learn in this distance learning. What are you doing? It's no longer an imminent threat. Why are you carrying on with this nonsense Governor Sisolak?

If they could have pool parties, if they could have gatherings everywhere, if you can have people in Walmart, people in the home depot, people in every grocery store. Why are we still doing this? It’s all a bunch of nonsense. From a medical perspective, I’m not seeing an impact from Covid on the ground. What I’m seeing is, delayed diagnoses for other conditions, breast cancer, skin cancer, in young people of onslaught of anxiety, depression, and increasing loneliness in the elderly. Recently we heard of a fractured humerus in an elder lady that has been like that for months as she was afraid to go outside. Stop with the fear mongering, stop with the nonsense Governor Sisolak. You and I both know, which is why you were in a restaurant in Las Vegas with live music and no mask that this is bullshit. So, stop it. Lives are at stake and it’s not anymore from the coronavirus, it’s lives from everything else but the coronavirus. Suicides, depression, cancer, respiratory diseases. You name it. People aren't going to the hospital and seeing their doctors because they’ve been scare by you.

Cowabunga Bay Water Park
Cowabunga Bay Water Park is a 23-acre surf-retro-themed water park with over 25 slides, wave pools, and other attractions. Cowabunga Bay water park is a 1960s beach-themed park opened in
The Hanging Tree
The Hanging Tree is an infamous tree where Adam Uber was hung. The story goes that in 1987, a crime occurred in Genoa, Nevada and it ended up with one man dead and the other hung on a tree. It started as a
Sahara Las Vegas
Sahara Vegas is a hotel with 1,616 rooms, full-service spa, and three outdoor pools, and a casino. It has three distinct towers namely, Alexandria tower, Marra Tower, and Blanca Tower.
Las Vegas Strip-Las Vegas
The Las Vegas Strip is 4.2 miles or 6.8 km long from the north end to the south end in Russell Road. It is a 45 minutes walk from Mandalay Bay on the south end to the Stratosphere casino and hotel on the north end.
Las Vegas Motor Speedway
The Speedway track length is 1.5 miles equivalent to 2.4 kilometers. This is the length used by NASCAR and IRL racing since 1996. However, in 2011 the IndyCar remeasured the Motor Speedway length and concluded it was a bit bigger,
Nevada Museum of Art
Nevada Museum of Art (NMA) is an art Museum in downtown Reno, Nevada. This is the only American Alliance of Museums accredited art museum in Nevada, and has collection of about 2000 pieces of 19th through 21st-century artwork.