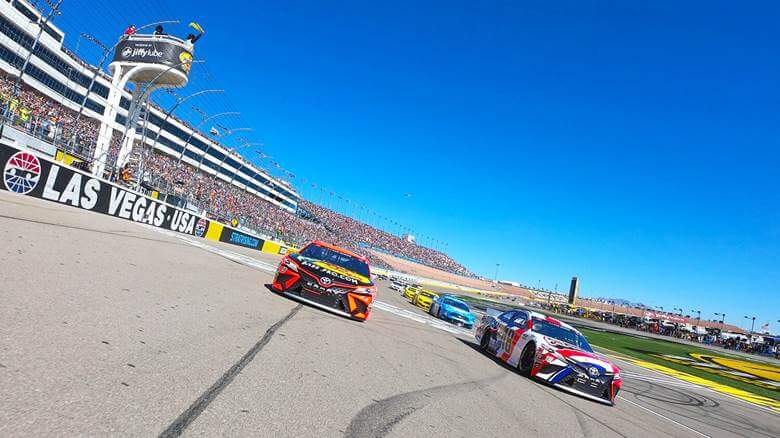 Following the final closure of Stardust International Raceway in 1971, a new speedway popped, the Las Vegas Speedrome -what would later come to be known as Las Vegas Motors Speedway. It was launched in 1972 featuring a 1.6-mile road course and a drag strip.

In 1983, another speedway, Craig Road Speedwaywas closed down and Alexander Rodriguez leased the space and added a 0.375-miletrack to the Speedrome in 1985. The expansion led to the construction of a 3/8 paved oval and the final track formed a D shaped banked course with a 4,000-seat grand stand. Four years later in 1989, Imperial Palace owner Ralph Engelstad purchased the new facility from the City of Las Vegas and renamed itLas Vegas Speedway Park. Seven years later in 1996, Engelstad partnered with William Bennett of the Sahara Hotel and launched a $72 million super speedway onthe raceway.

In September 1996, the first race with IndyCarevent was held and Richie Hearn emerged the winners. In November 1996, another race event, NASCAR Truck Series was held here.

In 1998, Engelstad and Bennet sold the raceway to Speedway Motorsports for a total $215 million. Between 1999 and 2002, the Winston No Bull 5-million-dollar bonus race event was held here. The $1 million winner in 2000 was Jeff Burton while Jeff Gordon won the race in 2001.

After the purchase, the drag strip was relocated into The Strip at Las Vegas Motor Speedway and the old drag strip plus the road course were rebuilt into the outer 2.4-mile road course. The 3/8 paved oval was rebuilt with a new pit lane. The old start-finish was moved to the opposite side. In 2004 and 2005, Champ Car race was held at the raceway and Sébastien Bourdais won the two years.

Reconfiguration of the Las Vegas Speedway

In March 2006, Nextel Cup Series was held at the Las Vegas Speedway and a proposal was made to reconfigure the Vegas Speedway.The reconfiguration would entail the extension of the previous 12 degrees banking into 20 degrees. The 20 degrees extension would allow the banking to sit on a gradient towards the outside of the raceway. It was a good plan to increase side by side racing.

Another part of the reconfiguration was the construction of the Neon Garage, a more modern fan zone. The Neon Garage would include a live entertainment space, unequalled access to the race drivers and team’s space, and access areas to the garage where cars are worked on for fans.The fans could now get to meet their favorite driver’s and see the cars being worked on. The pit road was moved 274 feet closer to the grandstands, a media center was created, and a ¼ mile oval for different types of racing like the Thunder Roadsters racing, Legend cars racing, and the Bandoleros racing were added. The reconfigured track was opened on August 8th 2006.

The largest rave festival in North America was held for the first time on 24th and 26th March 2011 here in Vegas raceway. The event has always been successful thanks to a ten-year deal between Insomniac Events and the Las Vegas Motors Speedway. The deal endsin 2022.

The event had a turnout rate of 235,000 plus people. Owing to its success a second one was held a year later between 8th and 10th June 2012. The attendance was also higher with a record 315,000 people. Electric Daisy Carnival (EDC) become a popular event at the Vegas raceway and the organizers turned it into an annual event. It was held again in 2013, and had a turnout of 345,000 people. The same happened in 2014, 2015, and 2016. The most recent event was held back in 2019. Unfortunately, the Electric Daisy Carnival (EDC) event planned for May 17th through 19th 2020 did not happen because of the coronavirus.

How Big Is The Las Vegas Motor Speedway Track?

The Speedway track length is 1.5 miles equivalent to 2.4 kilometers. This is the length used by NASCAR and IRL racing since 1996. However, in 2011 the IndyCar remeasured the Motor Speedway length and concluded it was a bit bigger, 1.544 miles equivalent to 2.485 kilometers. The additional 0.044 miles could be a result of the reconfiguration that happened in 2006. The speedway length of 1.5 miles is still in use today by NASCAR.

Where Is Las Vegas Motor Speedway?

Las Vegas Motor Speedway is not a short track.The 1.5-mile speedway can handle both stock car and drag racing. It has a total nine race tracks with a dirt track and off-road track. The raceway features a 1,600-acre daily track action. It is considered a diamond in the desert and the most remarkable race complex globally. Fans get to enjoy sprint cars at a dirtoval and dragsters at a 1/4-mile drag strip.

Las Vegas Motor Speedway events include but arenot limited to the following:

Race fans visiting Las Vegas Motor Speedway have the pleasure of watching the night races all happen under the glittering lights. The fans not only get to enjoy the amazing lights but also cooler conditions especially during sunny days. The scotching heat turns the fan moments into a toasty and stressing experience. Sometimes the Speedway has tobring in water misters and pools to help the fans deal with the heat.

Glittering Lights at Las Vegas Motor Speedway is a premiere drive-thru light show hosting variety initiatives to support local charities, churches and schools. Fans contribute to the charity by paying while they drive through the 2.5-mile course with millions of twinkling lights. So, you can make a difference in the world and create one of the most amazing memories. Glittering Lights Tickets at the Las Vegas Motor Speedway starts from as low as $35.

Las Vegas Motor Speedway always organizes their races with the weather in mind. And they are always ready to adjust the timing for the events in case of unexpected weather changes. Also, Las Vegas Motor Speedway puts in necessary measures to tackle any kind of issues arising fromextreme weathers. For instance, in September 2019, the NASCAR triple headerraces were pushed to night time due to extreme weather (LVMS Media Relations, 2019). Since Las Vegas Motor Speedway is located in the desert, weather can be extreme at times. Races were moved to the evening and night time since the fans were suffering under the toasty heat.

Below is a table with estimated weather patterns through out the year in Las Vegas Motor Speedway.

Below are the various events expected this year 2021. Get your ticket here.

The weekend racing events are one of the most spectacular attractions in the state of Nevada. You can never get enough of what the Vegas Desert Valley has to offer. The 1.5-mile Las Vegas Motor Speedway provides the most beautiful and thrilling racing experience. Fans can see their favorite drivers and car makes battle for the price in four-plus lanes raceway. Racing is even better at night when the twinkling lights are seton to ensure fans don’t miss a single part of the action. Racing with lights is also a tactic to escape the day time toasty desert heat. Joey Gilbert believes that Las Vegas Motor Speedway in Las Vegas, Nevada is one event that makes the state of Nevada great. The 2-day events bring together people from different parts of the state and the entire country, making it a unifying factor in the United States.

Casino Fandango
Casino Fandango was opened in July 2003 after the renovation of an 80,000 square feet warehouse. Casino Fandango has a total 42,943 square feet gaming space, movie theater,
Spooner Lake
Spooner Lake Tahoe has an extensive recreational and natural oasis, the Spooner Back Country. The Back Country is surrounded by more than 12,000 acres of forest. It has a 5-mile hiking, mountain biking, and equestrian trails.
Fremont Street Experience
The centerpiece of Fremont Street Experience is Viva Vision, world’s largest video screen. Viva Vision is 1,375 feet long and is suspended 90 feet above the pedestrian mall. It has a total 49.3 million LED lights and a 600,000-watt sound system.
Silverton Casino Hotel
Silverton Casino Hotel or Silverton Casino Las Vegas is a 300-room hotel and casino in Enterprise Nevada. Silverton Casino Hotel Las Vegas is built on an 80-acre land and is considered one of the best locations for a hotel away from The Strip
Hoover Dam
The total number of people who died while building Hoover Dam is 96. The deaths or fatalities are classified as industrial fatalities.
Las Vegas Strip-Las Vegas
The Las Vegas Strip is 4.2 miles or 6.8 km long from the north end to the south end in Russell Road. It is a 45 minutes walk from Mandalay Bay on the south end to the Stratosphere casino and hotel on the north end.