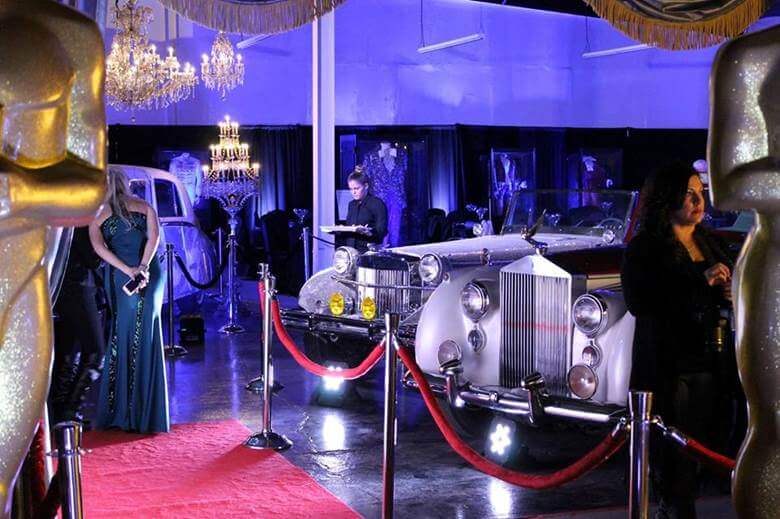 Liberace Museum Collection was a private museum collection owned by Liberace Foundation. The Liberace Foundation was founded in 1976 by Liberace himself. Władziu Valentino Liberace is a famous American pianist, singer, and actor born in May 16, 1919 and died in 1987. Liberace lived in Las Vegas from 1944 when The Vegas Strip had only two hotels. He accredited to pioneer the showmanship business and defining the over-the-top luxury lifestyle of Vegas Strip. From the 1950s to the 1970s, Liberace was the highest paid entertainer in Sin City, and through Liberace Foundation, he gave away millions. Liberace endowed Liberace Museum Collection with his collection of automobiles, flamboyant costumes, pianos, antiques, jewelry, art, and $4million in cash much of which became grants and scholarship. By 2011, Liberace Foundation endowments had exceeded $6 million in scholarships and grants.

In 2010, Liberace Museum Collection closed its doors for good due to financial struggles for over a decade. Much of the museum's collection was relegated to storage. A total of 31 employees lost their jobs when the museum was closed down on October 17, 2010. The low turnout of visitors led to insufficient funding such that it was hard to meet the payroll and operating cost. During its peak, the museum could attract up to 450,000 visitors a year but by 2010, it received 50,000 visitors per year (Las Vegas Sun, 2010). The museum was opened when The Vegas Strip had only two hotels. In the 2000s, the number of hotels and major attractions had greatly increased and became rivals to the old school museum which was far from downtown Las Vegas. The Liberation Foundation was forced to take money out of the endowment account to meet the expenses. The museum closed but not for good.

How Far is Liberace Museum from the Vegas Strip?

Liberace Museum is located 3.6 miles or 11 minutes from the Vegas Strip.

Liberace Museum Cars are stored at Liberace Garage and they include:

Where Is Liberace Collection on Display?

In March 2016, news came in that Liberace car collection would be soon available at Hollywood cars Museum in Las Vegas. So, Liberace Garage was reopened to the public in 2016 at 5115 Dean Martin Drive, Suite 905. The Liberace Garage has a total 10,000 square feet of space to showcase Liberace large artifacts and cars such as the 1961 Rolls Royce Phantom V Limo, 1957 Rolls convertible, Crystal Roadster, and a real London taxi.

Thriller Villa and the Liberace Museum are also in operation but are not open to the public. Thriller Villa is located in former Las Vegas residence of Michael Jackson. These parts of the museum are available by special appointment only.

What is Liberace Museum Fee?

Liberace Garage tickets are available for $18 online, and $20 at the door. Thriller Villa appointment fee is $129 per person, which includes transportation from Vegas Strip, champagne lunch, and admission fee.

Liberace Museum not to have coupons now. The last coupon information available is way back in 2010 before closure. Liberace Museum was offering a 2 in 1 coupon that could beprinted from online (VegasCoupons, 2012).

Why Did the Liberace Museum Closed?

Liberace Museum was closed in 2010 owing to huge financialstruggle for a period of 10 years. Liberace Museum, which was located in The Las Vegas Valley had initially been a top destination for Las Vegas residents and outsiders. However, as the Vegas Strip continued to rise, the museum started experiencing a drop in number of visits per year. Liberace Museum was receiving 450,000 visitors a year, which put them at the same position as the Hoover Dam, but at the time of closure, the number had dropped to 50,000 visitors a year. Despite their aggressive marketing strategy, they could not manage to draw numbers and the cost of operating became too much. They tried using Liberace Foundation funds to stay operational but by 2010, nothing much could be done. They had to close down indefinitely.

Is the Liberace Museum Still Open?

Which Part of Liberace Museum Is Open to The Public?

Only Liberace Garage at 5115 Dean Martin Drive, Suite 905 is open to the public.

Yes, Liberace Museum is still standing but not in its original home. Some of the museum’s artifacts are moved across the country while the cars collection has been placed in a separate location from the other collections. Liberace Garage is located at 5115 Dean Martin Drive, Suite 905 and Liberace Museum Collection is located at Thriller Villa the former residence of Michael Jackson.

Can I Hold an Event at Liberace Museum Vegas?

You rent book Liberace Garage for an event such as Corporate events, wrap parties, private performances, wedding receptions, birthdays, and special occasions. However, you cannot hold an event at Liberace Museum Collection, located at Thriller Villa, the former residence of Michael Jackson.

Liberace Garage is open to public tours and events. Liberace Museum Collection, located at Thriller Villa is also open for events but only to limited guests who must be approved by the chairman. There are no publictours at Thriller Villa.

Liberace Museum Collection holds Las Vegas and Nevada’s entertainment history as one of the oldest entertainment destinations in the Vegas valley. It holds the jewelry, pianos, garish gowns and other artifacts owned by the great pianist to help the Liberace foundation support Performing and Creative Arts. Liberace Museum & Foundation was closed down in 2010 due to financial difficulties, but was able to reopen back in 2016. When Las Vegas was developing, the museum could receive countless visitors, but after erection of more attraction like the Vegas Strip, the number of people visiting Liberace Museum dropped and it has never been the same again. The Vegas valley hasalways been an amazing destination while visiting Vegas and can be a cheap butluxurious treat. Joey Gilbert agrees that Las Vegas, and neighboring cities like Paradise has some of the most amazing attractions like the Liberace Museum.

Sahara Las Vegas
Sahara Vegas is a hotel with 1,616 rooms, full-service spa, and three outdoor pools, and a casino. It has three distinct towers namely, Alexandria tower, Marra Tower, and Blanca Tower.
Nevada Museum of Art
Nevada Museum of Art (NMA) is an art Museum in downtown Reno, Nevada. This is the only American Alliance of Museums accredited art museum in Nevada, and has collection of about 2000 pieces of 19th through 21st-century artwork.
Stratosphere Tower
Stratosphere Tower Las Vegas or The Strat is an iconic hotel and casino in Las Vegas. The Stratosphere Tower total height is 1,149 ft (350.2 m). It's tallest free-standing observation tower in the United States.
Liberace Museum Collection
Liberace Museum Collection was a private museum collection owned by Liberace Foundation. The Liberace Foundation was founded in 1976 by Liberace himself. Władziu Valentino Liberace is a famous American pianist, singer, and actor born in May 16, 1919 and died in 1987
Las Vegas Strip-Las Vegas
The Las Vegas Strip is 4.2 miles or 6.8 km long from the north end to the south end in Russell Road. It is a 45 minutes walk from Mandalay Bay on the south end to the Stratosphere casino and hotel on the north end.
Hoover Dam
The total number of people who died while building Hoover Dam is 96. The deaths or fatalities are classified as industrial fatalities.