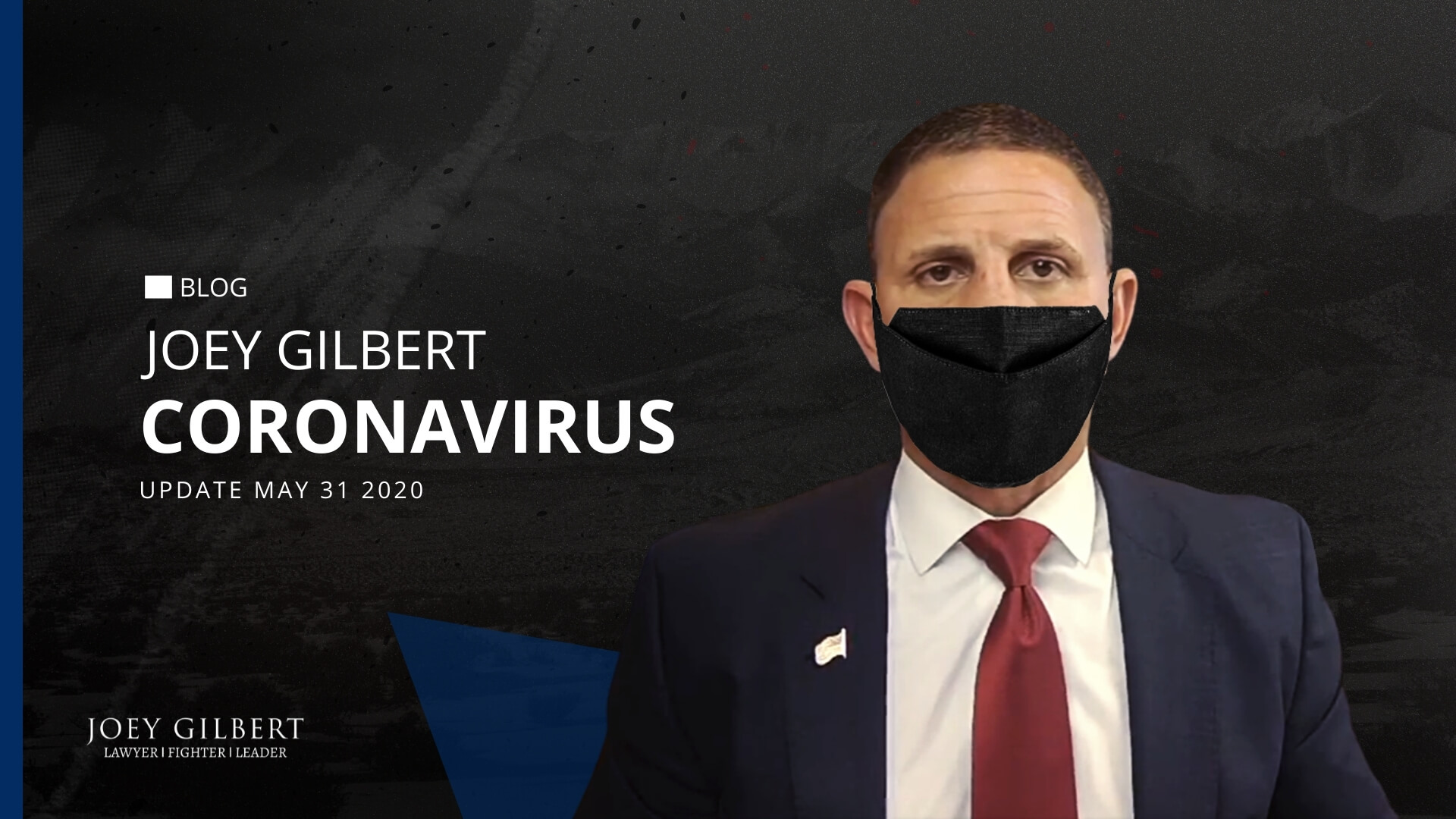 I just want to talk about a couple of things, obviously what is happening across the country as a result of George Floyd’s death in Minneapolis, which was one of the most disgusting and heartbreaking thing I have ever watched in my life, hands down. There’s no excuse or anything you can say that’s going to convince me that not only was that the most disgusting thing I’ve ever seen in any shape or form. You had a handcuffed man on the ground next to a police cruiser with 4 other people, and an officer kneeling on him with his knee on his neck while he’s handcuffed and his head into the pavement.

If you are not being real then get out, I went to collage here at the university of Nevada, and many of my friends, I had a lot of black friends, okay. I have to say African-Americans or I can say my black friends, and you know what, and my Hispanic friends, and my Latino friends, they were treated differently and that still happens, you could sit back and I could sit back and watch as they walked into a room, as they walked into a restaurant, as they walked into a store, all right, I could watch it. I was in front driving and they were behind and they got pulled over and I didn’t.  We used to laugh and call it driving while black. It was ha ha funny, but It’s not ha ha funny anymore.

I want to say this, you know, and because there’s going to be people that attack me right away on police. Overwhelmingly the majority of law enforcement I know based on my personal experience would never condone that, allow that to happen, sit by while that went down, okay, and you know, the next part is, if I ever saw that going down, I would have removed that officer from him or tried, you know. At the end of the day, the law enforcement I know based on my experience and their training there was no tactic. What was done was absolute cruelty and murder and there’s again. Ima measure like this, but for the knee to the neck on the handcuffed man on the ground, his head smashed into the ground and the knee to the artery would he be alive? You can come up with the whatever else was in his system, go to Tom Cruise good men defense, like he had other stuff in his system. But for the knee to the neck, the knee to the artery, handcuffed on the ground, would he be alive today. Okay, so that officer is in jail for a long time, the other ones should do some time for sure for not doing something, but again I want to just come back and say this.

I can’t say I feel you or anybody that tries to say that to this community, and I’m talking about the black community that is long overdue to be treated with the same respect and dignity as everyone else. I mean, do I see a difference between me with my staff and the people I’m around, but is there a difference? yes. Is there a disparity? yes. Can we do better? yes. Going back to the law enforcement, based on my personal experience with law enforcement, there are bad apples everywhere, bad lawyers, there are bad police officers, there are bad mechanics bad doctors, bad coaches, bad everything. And I think that there are, you know some evil, just like there’s evil, shitty people out there, there’s evil and shitty officers, and you know the other thing I want to say is, you know, I do think sometimes police go a little far, I think sometimes they take their authority too far, I really do, but that’s the same for everybody. Anybody got an ego, anybody can have an attitude, and I don’t know how, maybe this person was bullied, I don’t know. All I’m saying is look man, don’t let a bad an apple here and there spoil the bunch.

And I’ll say, I know those of you up here destroying stuff in northern Nevada, you are not from here, you wouldn’t do that, you wouldn’t throw rocks to our city hall, you wouldn’t do that if you were from here. So, my message to the community right now is, support those who are hurting and support those that are demonstrating. You should know it was Black Lives Matter folks that were screaming stop to the people destroying stuff, I watched it with my own eyes, all right, I saw it. They were peaceful, they were the ones that were trying to stop those idiots, those thugs from burning, and those thugs were white by the way. I don’t know if anyone wants to get real here for a second, the ones I saw alright.

So, at the end of the day, that needs to not happen. Demonstrate peacefully, protest peacefully, you know, do it. Listen, there are pastors out there, there are people of every walk of the way, black, brown, white, yellow, green, everybody is out there. You know that’s not to be disrespectful I’m just saying everyone is out there and they are peacefully demonstrating. Don’t ruin what they stand for, don’t ruin the memory of George Floyd by going and burning buildings and looting. That is hurting businesses that you use every day, that’s not fair, and if you are not from the area, get out, and get out now, and to the law enforcement, you know I’m sorry that once again, someone has put a stain on you, but I know you, I know the community and you are not trained like that, there’s no tactics ever deployed like that, it's not fair, and my heart go out to you,, and I hope you stay safe, and I hope all the demonstrators and protesters can stay safe and that cooler minds can prevail, but please do not destroy our businesses. Please do not destroy our businesses.

To sum it all up as I sit in my sauna. People are not social distancing, people have been everywhere, people have been bursting places. It doesn’t look good in the current times. At the end of the day, let's get back to business, lets open the state up, let's make the medication that’s most effective, available to the senior citizens and the nursing homes. Please do not hurt the community. Don’t be out there observing, don’t feed the bears, like they say. If there’s people coming in to do damage, don’t watch them, don’t cheer them, don’t videotape them. After your protest, after your demonstration, go home to your wife, to your family, to what matters most, and um don’t break things, don’t destroy us. This applies to Las Vegas too. I know people are angry and you have a right to be. We will step up. We are going to start doing more you know, as I said I’ve seen it with my own eyes, but don’t let this movement get highjacked by people that are just here to cause pain and division. This man especially wouldn’t want this to happen, George Floyd from what I could see, with what information I read about him, and you know, that act of cowardice, took place. Step up, don’t you dare burn our buildings, our people, our government people, don’t act like this isn’t real. At the end of the day, people are treated differently and it need to stop, it stops when we all stand up and I just want to say god bless. I’m a product of this state, I’m a product of this community. One love, much love and respect, and again guys, take care of each other out there. If you are from this area and you see people trying to do bad in front of them, if they trying to start, tell them to stop, and stop Infront of them if they are trying to start bullshit with law enforcement, we don’t need this. We need our business back, we need our community back, you know, we are Nevada strong family. God bless, stay safe out there. If you need me, reach out at Joeygilbertlaw.com.

Liberace Museum Collection
Liberace Museum Collection was a private museum collection owned by Liberace Foundation. The Liberace Foundation was founded in 1976 by Liberace himself. Władziu Valentino Liberace is a famous American pianist, singer, and actor born in May 16, 1919 and died in 1987
Fremont Street Experience
The centerpiece of Fremont Street Experience is Viva Vision, world’s largest video screen. Viva Vision is 1,375 feet long and is suspended 90 feet above the pedestrian mall. It has a total 49.3 million LED lights and a 600,000-watt sound system.
Colorado River Laughlin, NV
Colorado River tributaries in the North are Green, Gunnison, and San Juan, and they deliver 9million acre feet of water into the River.
Silver Lake, Cold Springs, Nevada
Silver Lake is nestled in a quiet valley just 4.2 miles from ColdSprings, Nevada. It is located under 10 miles from Reno, Nevada.
Wet ‘n’ Wild Las Vegas
Wet 'n' Wild Las Vegas is located in Spring Valley,Nevada. Wet ‘n’ Wild Las Vegas is located just 20 minutes away from the famous Vegas Strip and has a number of attractions including swimming pools, slides, water falls, and much more.
Las Vegas Strip-Las Vegas
The Las Vegas Strip is 4.2 miles or 6.8 km long from the north end to the south end in Russell Road. It is a 45 minutes walk from Mandalay Bay on the south end to the Stratosphere casino and hotel on the north end.