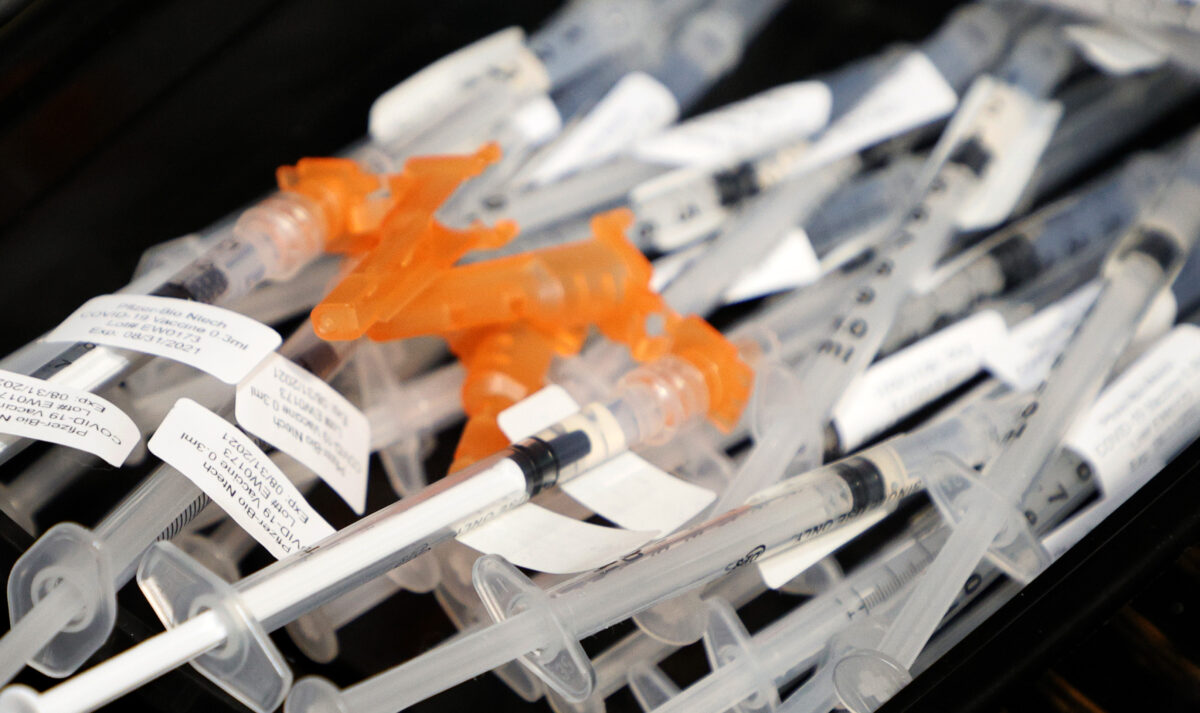 Federal authorities have received over 800 reports of heart inflammation in people who received a COVID-19 vaccine, a health official said Thursday.

The reports of myocarditis or pericarditis were submitted to the Vaccine Adverse Event Reporting System, a passive reporting system run jointly by the Centers for Disease Control and Prevention (CDC) and the Food and Drug Administration, through May 31.

The bulk of the reports described heart inflammation appearing after the second of two doses of either the Pfizer of Moderna vaccines, both of which utilize messenger RNA technology.

Authorities stress that anybody can submit reports through the reporting system but authorities have already verified that 226 of the reports meet the CDC’s working case definition, Dr. Tom Shimabukuro, a deputy director at the agency, said during a presentation of the data. Followup and review are in progress for the rest.

Of the 285 case reports for which the disposition was known at the time of the review, 270 patients had been discharged and 15 were still hospitalized, officials said. Myocarditis typically requires hospital care. No deaths were reported.

The CDC announced last month that it was investigating reports of heart inflammation in teenagers and young adults who received a COVID-19 vaccine, though it took no definitive action besides saying it would continue reviewing case data.

An advisory committee to the agency, the Advisory Committee on Immunization Practices, said in a little-noticed update published dated May 24 and published on June 1 that data from VAERS showed that in the 30 days following the second dose of mRNA vaccinations, “there was a higher number of observed than expected myocarditis/pericarditis cases in 16–24-year-olds.”

Data from the Vaccine Safety Datalink, an active reporting system that relies on nine healthcare organizations in seven states, it added.

“However, analyses suggest that these data need to be carefully followed as more persons in younger age groups are vaccinated,” the advisory committee’s vaccine safety workgroup said in its report.

Israel’s Health Ministry said that same day that it found 275 cases of heart inflammation among the more than 5 million people in the country who received a vaccine between December 2020 and May. An Israeli study found “a probable link” between receiving the second dose of the Pfizer jab “and the appearance of myocarditis among men aged 16 to 30,” the ministry said.

The figures are also consistent with other case reports and data from the Department of Defense.

The vast majority of the U.S. reports deal with male patients. Approximately 300 preliminary reports indicated the patients suffered chest pain, with nearly as many having elevated cardiac enzymes.

A case report examining myocarditis in seven adolescents following vaccination with Pfizer’s jab, published in Pediatrics, the journal of the American Academy of Pediatrics, this month, said all seven developed the inflammation within 4 days of receiving the second dose, did not have evidence of COVID-19 infection, and did not meet the criteria for MIS-C, a rare disease.

The seven males, between the ages of 14 and 19, all required hospital care but each was eventually discharged.

Authors, who did not respond to requests for comment, said no link has been established between the vaccines and myocarditis and that the benefits of the vaccines outweigh the risks. But they also urged healthcare workers “to consider myocarditis in the evaluation of adolescents and young adults who develop chest pain after COVID-19 vaccination.”

A commentary on the study published in the same journal, said “there are some concerns regarding this case series that might suggest a causal relationship and therefore warrant further analysis through established surveillance systems.”

“First, the consistent timing of symptoms in these seven cases after the second vaccination suggests a uniform biological process. Second, the similarities in clinical findings and laboratory characteristics in this series suggest a common etiology. Finally, these cases occurred in the context of a dearth of circulation of common respiratory viruses known to be associated with myocarditis, and thorough diagnostic evaluations did not identify infectious etiologies,” they added.

The expected number of myocarditis/pericarditis cases in those aged 16 or 17, based on background incidence rates and the number of doses administered to that population through May 31, is between two and 19. But based on the VAERS reports, the number is 79.

Likewise, the expected number for cases among young adults between the ages of 18 and 24 is eight to 83. The number based on the reports is 196.

“In the 16- to 17 year-olds and the 18- to 24-year-olds, the observed reports are exceeding the expected based on the known background rates that are published in literature,” Shimabukuro told members of a Food and Drug Administration vaccine advisory committee in the meeting on Thursday, though he cautioned that not all the reports will “turn out to be true myocarditis/pericarditis reports.”

“Of note, of these 528 reports after second dose with symptom onset within 30 days, over half of them were in these younger age groups, 12–24 years old, whereas roughly 9 percent of total doses administered were in those age groups, so we “clearly have an imbalance there,” he added later.

Data from the Vaccine Safety Datalink, which comes from nine healthcare groups that have collectively administered over 8.8 million doses—only some 284,000 of those have been given to 12- to 17-year-olds—did not indicate safety concerns, with just 60 myocarditis or pericarditis events reported through May 29, the doctor continued.

A Food and Drug Administration surveillance system, the Biologics Effectiveness and Safety Initiative, which utilizes claims data from CVS and two other partners, has detected 99 cases of myocarditis/pericarditis in the 42 days following vaccination among some 3.1 million shots given to people between the ages of 12 and 64, the panel was told earlier by an official from the drug regulating agency.

Another 1,260 were reported in people 65 or older through claims data from Medicare claims data.

Dr. Cody Meissner, chief of the Division of Pediatric Infectious Disease at the Tufts Children’s Hospital, and a member of the panel that heard from Shimabukuro and others, said after the presentations that he was “struck by the fact” that myocarditis “occurs more commonly after the second dose.”

“It’s a pretty specific interval of time, it’s primarily after the mRNA vaccines as far as we know, we know that the consistent age, there’s a lack of alternative explanations even though these patients have been pretty well worked up, and it’s a widespread occurrence because, as you said, Israel has found a pretty similar situation,” he said during the meeting.

He asked Shimabukuro about the rates of blood clots seen in women between the ages of 30 and 49 after vaccination—most of the clots appeared in that population after getting a Johnson & Johnson shot, though officials ultimately lifted a pause, saying the benefits outweighed the risks—and to restate the rate of incidence of myocarditis in adolescents after a jab.

Shimabukuro said that in contrast with the clotting situation, when data showed “strong evidence of a causal relationship fairly early on,” further study is needed on heart inflammation.

“It’s still early,” he added, noting that authorization for a vaccine for 12- to -15-year-olds didn’t come until mid-May while immunization of older adolescents largely came later than shots for adults.

“I believe that we will ultimately have sufficient information to answer those questions,” he said.

Another panel member, Dr. Jay Portnoy, director of the Division of Allergy, Asthma, & Immunology at Children’s Mercy Hospitals & Clinics, asked for a comparison between the adverse events in vaccinated versus unvaccinated persons, saying if the adverse event rate was lower in those who are vaccinated, then it would still be worth getting a jab.

Shimabukuro said a risk-benefit assessment would be provided by the CDC’s advisory panel, known as ACIP, on vaccines during a meeting next week.

The CDC did not respond to requests for comment, including a question on whether officials have considered pausing mRNA vaccines for adolescents. On its website, the agency says it and its partner are investigating the myocarditis and pericarditis reports.

“CDC continues to recommend COVID-19 vaccination for everyone 12 years of age and older given the risk of COVID-19 illness and related, possibly severe complications, such as long-term health problems, hospitalization, and even death,” it states.

A Pfizer spokesperson told The Epoch Times via email that the company is aware of federal data indicating “rare reports of myocarditis and pericarditis, predominantly in male adolescents and young adults, after mRNA COVID-19 vaccination.” It noted that federal officials have not concluded that mRNA COVID-19 vaccines cause either condition, before expressing support for an assessment of suspected adverse events.

“With a vast number of people vaccinated to date, the benefit risk profile of our vaccine remains positive,” the spokesperson added.

Moderna did not return an inquiry.

Dr. Monica Gandhi, professor of medicine and associate chief at the University of California, San Francisco, told The Epoch Times in an email that in light of the increased risk of myocarditis above expected rates among young people, especially after the second dose, parents should keep a close eye out for when guidance is issued by federal authorities.

“Possibilities include only vaccinating children without prior infection as there is an association between prior COVID and this adverse effect; giving 1 dose instead of 2 below the age of 20; addressing the dosage of the vaccine (currently at 30 micrograms down to the age of 12, which is the same dose as in adults); and extending the duration between doses 1 and 2 for younger people,” she said. “I look forward to ACIP guidance on this over the next few weeks.”

South Point Hotel Casino & Spa
South Point Hotel, Casino and Spa is 24-story 3.5-star sparesort in Las Vegas area, Nevada. The 1,350-room casino was opened in November 2005 under the name South Coast
Silver Lake, Cold Springs, Nevada
Silver Lake is nestled in a quiet valley just 4.2 miles from ColdSprings, Nevada. It is located under 10 miles from Reno, Nevada.
Silverton Casino Hotel
Silverton Casino Hotel or Silverton Casino Las Vegas is a 300-room hotel and casino in Enterprise Nevada. Silverton Casino Hotel Las Vegas is built on an 80-acre land and is considered one of the best locations for a hotel away from The Strip
Wet ‘n’ Wild Las Vegas
Wet 'n' Wild Las Vegas is located in Spring Valley,Nevada. Wet ‘n’ Wild Las Vegas is located just 20 minutes away from the famous Vegas Strip and has a number of attractions including swimming pools, slides, water falls, and much more.
Colorado River Laughlin, NV
Colorado River tributaries in the North are Green, Gunnison, and San Juan, and they deliver 9million acre feet of water into the River.
The Mob Museum
The Mob Museum Las Vegas, Nevada also known as The National Museum of Organized Crime and Law Enforcement, is a nonprofit organization dedicated to advance the public understanding of organized crime and the impact it has had on American society. The Mob Museum has 3 floors and a basement (The Underground) full of exhibits.