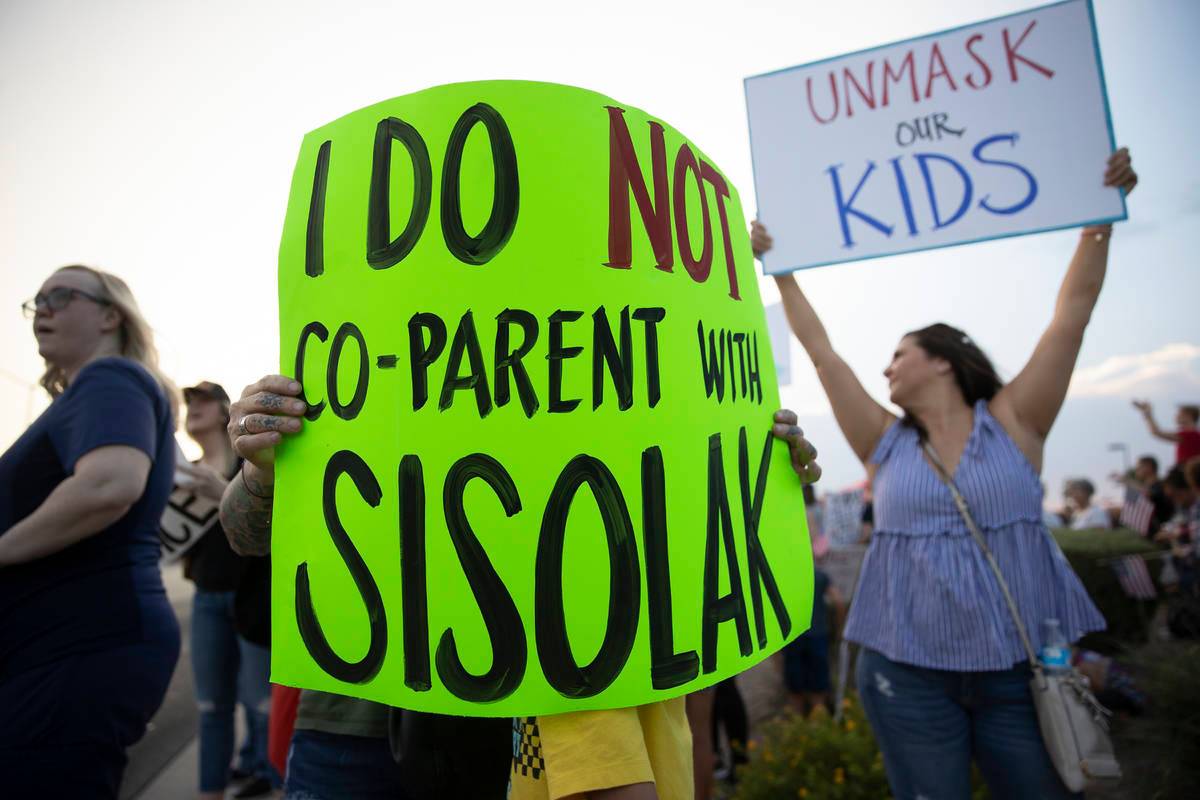 Parents of two students at Clark County schools have filed a class action lawsuit against Gov. Steve Sisolak and the school district alleging that ordering students to wear masks violates their constitutional rights.

“It has become exceedingly clear that” Sisolak, the Clark County School District, Attorney General Aaron Ford and other state officials “have engaged in gross negligence, bad faith and willful misconduct by issuing Orders and Emergency Directives that are arbitrary and capricious, and unsubstantiated by concrete empirical evidence,” the suit stated.

The mask order set in place late last month for all students and employees forced parents “to bear a public burden by entirely eviscerating Plaintiffs’ ability to send their children to school freely and unhindered by arbitrary directives in violation of their constitutional rights,” the complaint continued.

The complaint was filed Thursday by Reno attorney Joseph Gilbert, who has announced a Republican bid for governor in 2022, and Las Vegas attorney Sigal Chattah, who announced this year that she would run as a Republican for Nevada attorney general next year.

In announcing the mask mandate, officials with the district — the nation’s fifth-largest public school system with more than 300,000 students — cited “current high transmission rates of COVID-19” and in alignment with recommendations from local and national health authorities.

On Thursday, the state recorded 1,221 new coronavirus cases and 24 deaths from the previous day, bringing the total number of reported COVID-19 related fatalities to 6,120 in Nevada.

The lawsuit cites low fatality rates for those younger than 18, calling the mask order “overboard and unconstitutional.”

Parents “will be fearful of exercising their right to have their children attend school without suffering retribution for exercising constitutionally protected rights,” according to the complaint.

“These policies, as well-intentioned as they may be, have had an unlawful and disparate effect on some people, their health, mental well-being and their civil rights, to the point where life, liberty and the pursuit of happiness have been ripped away from law-abiding citizens and their children.”

Officials with the governor’s office, the attorney general’s office and the school district declined to comment on the lawsuit.

Silver Lake, Cold Springs, Nevada
Silver Lake is nestled in a quiet valley just 4.2 miles from ColdSprings, Nevada. It is located under 10 miles from Reno, Nevada.
Las Vegas Strip-Las Vegas
The Las Vegas Strip is 4.2 miles or 6.8 km long from the north end to the south end in Russell Road. It is a 45 minutes walk from Mandalay Bay on the south end to the Stratosphere casino and hotel on the north end.
Peppermill Concert Hall
Peppermill Concert Hall is a hotel, casino, and a contemporary concert venue in Wendover, Nevada. Peppermill Concert Hall hosts concerts for a wide range of genres and showcases popular performers and comedians. The hall’s total worth is $21 million and it has a 1000-seat capacity
Nevada Museum of Art
Nevada Museum of Art (NMA) is an art Museum in downtown Reno, Nevada. This is the only American Alliance of Museums accredited art museum in Nevada, and has collection of about 2000 pieces of 19th through 21st-century artwork.
Sahara Las Vegas
Sahara Vegas is a hotel with 1,616 rooms, full-service spa, and three outdoor pools, and a casino. It has three distinct towers namely, Alexandria tower, Marra Tower, and Blanca Tower.
Ruby Mountains
Ruby Mountains are mountain ranges and part of a group of metamorphic and igneous rocks that were once buried deep within the Earth’s crust. Ruby Mountain near Elko, Nevada was formed about 540 million years ago based on the age of the rocks forming the mountain. Ruby Mountains reach an elevation of 11,387 feet.