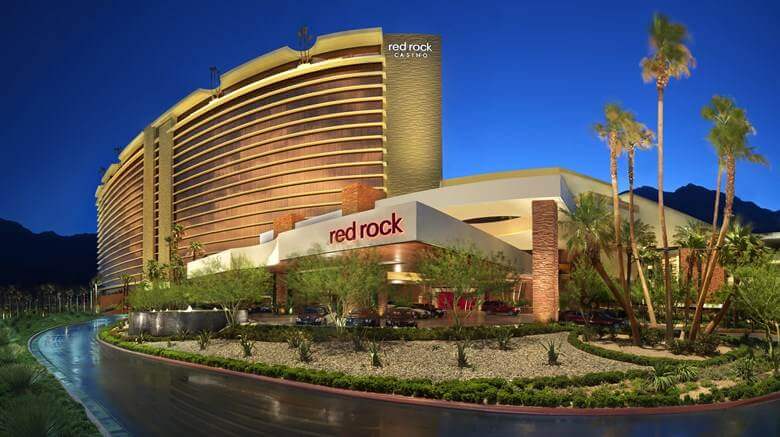 Red Rock Casino is a hotel and casino with a total of 796 rooms and 118,309 square foot gaming room. Red Rock Casino was opened on April 18th, 2006 after 2 years of construction from 2004. Red Rock Casino offers supreme luxury and unprecedented accommodations. The hotel and casino is 20 stories high, but it’s a reduction from the initial plan of 23 stories. It was reduced because residents were concerned that a tall structure would ruin the amazing views of Red Rock Canyon. Since opening, Red Rock Casino has been renovated several times in 2006 and 2007, 2014, and 2020. The renovations include huge expansion projects like the $65 million hotel expansion and an additional $31 million bowling alley in 2006, and also a $35 million expansion to include some more restaurants in 2014.

Red Rock Casino also Red Rock Casino or Red Rock Casino and resort is a resort and Casino owned by Casino Stations. It was initially named Red Rock Station after the nearby Red Rock Canyon National Conservation Area. Construction of the resort & spa faced some challenges in its official years when the proposed 300-foot hotel tower, 23-story time share condominium was opposed by the residents in conjunction with the Culinary Workers Union, Sierra Club, and The Conservation Fund. Red Rock Casino Resort & Spa project was expected to start in 2003, but it was delayed by the opposition. Red Rock Casino Resort & Spa owners, Station Casinos initial project was aimed at giving the guests a perfect view of the Red Canyon and the Las Vegas Strip. Summerlin residents wouldn’t agree to the 300-foot tower or anything above 100 feet, but after negotiations an agreement for 198-foot hotel tower was reached. Construction began in 2004 and by April 2006, the $925 million Resort & Spa construction was completed.

Where is Red Rock Casino?

Where Is the Red Rock Casino In Las Vegas?

How Far Is the Red Rock Casino from The Las Vegas Strip?

Red Rock Casino is about 10 miles west of the Las Vegas Strip. If you are visiting Las Vegas, you should consider residing in this luxurious casino and hotel. Red Rock Casino resort also offers tours, horseback rides, kayaking, and shuttle transfers. You don’t have to worry about the distance, its just a few minutes away from theLas Vegas Strip.

Red Rock Hotel and Casino in Vegas or Red Rock Resort & Spa is located in Las Vegas Valley in one of the most prestigious neighborhoods in Clark County, Nevada, United States. Red Rock Hotel and Casino in Vegas address is 11011 W Charleston Boulevard, Las Vegas, NV 89135. Red Rock Casino features has the most luxurious hotel rooms and suites, sensuous spa treatments, appetizing dining and thrilling casino gaming than most of the casinos dotted around the Las Vegas Valley.

How Far Is Red Rock Casino from The Airport?

How Much Are the Villas at Red Rock Casino?

The official website for is Red Rock Casino Resort & Spa http://redrock.sclv.com/.This is where you need to visit to explore your options at the Red Rock Casino and for enquiries and bookings. You can see the variety amazing room options available there.

Clark County Wetlands Park
Clark County Wetlands Park is the largest park in Clark County spanning 2,900 acres along the Las Vegas Wash. Clark County Wetlands Park has two sections, one is a 210-acre wetlands nature preserve with over 3miles of flat paved trails passing through desert vegetation, cottonwood grove,
Sunrise Mountain
Sunrise Mountain is a rocky mountain in Sunrise Manor, Clark County, Nevada. Sunrise Manor is an unincorporated town in Clark County, Nevada just next to Las Vegas and Nellis Air Force Base. Sunrise Mountain has an elevation of 1025m. At the base of Sunrise Mountain is the Vishnu Schist, some of the oldestrocks in North America.
The Mob Museum
The Mob Museum Las Vegas, Nevada also known as The National Museum of Organized Crime and Law Enforcement, is a nonprofit organization dedicated to advance the public understanding of organized crime and the impact it has had on American society. The Mob Museum has 3 floors and a basement (The Underground) full of exhibits.
Wet ‘n’ Wild Las Vegas
Wet 'n' Wild Las Vegas is located in Spring Valley,Nevada. Wet ‘n’ Wild Las Vegas is located just 20 minutes away from the famous Vegas Strip and has a number of attractions including swimming pools, slides, water falls, and much more.
Sam's Town Hotel & Gambling Hall
Sam's Town Hotel & Gambling Hall is a 3-star hotel in Las Vegas area. Sam's Town Hotel & Gambling Hall was opened in 1979. It is a Suburban Las Vegas resort featuring a 25,000-square-foot indoor park, bowling center, 5 restaurants, 645 rooms, movie theater, and one of the largest casino floors in
Hoover Dam
The total number of people who died while building Hoover Dam is 96. The deaths or fatalities are classified as industrial fatalities.