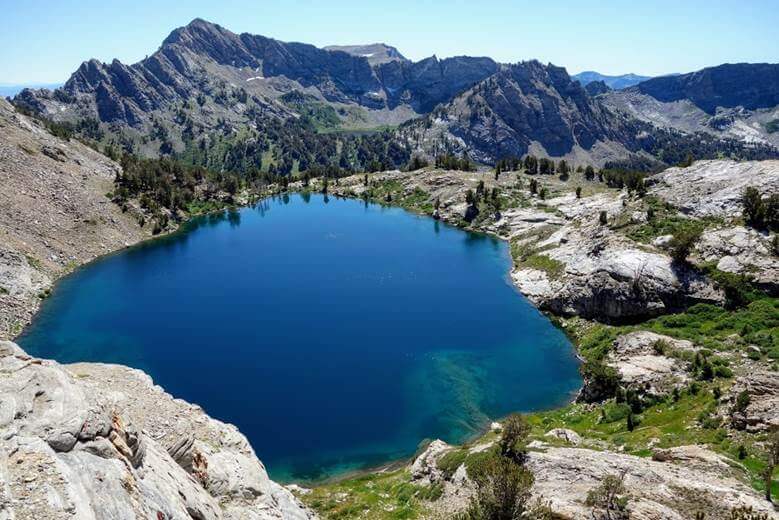 The breathtaking ruby range Nevada officially known Ruby Mountains is also referred to as Alps of Nevada or Rubies. The name 'Ruby' comes from garnets – a group of silicate minerals that were found here by early explorers. The garnets or, red semi precious stones are found in certain metamorphic rocks that form the Ruby Mountains.

How Were the Ruby Mountains Formed?

Ruby Mountains in Spring Creek, Elko county, NV were formed as a result of metamorphic core complex or continental extension.The Ruby Mountains tell a story of metamorphism, granitic intrusion, uplift and glaciation. During the extension, the middle and lower crust is dragged from beneath, extending the upper crust. The upper crust continues to uplift as the metamorphic core complexes progresses, and the result is a domed metamorphic footwall, non-metamorphosed hanging wall, and a shallowly mylonitic shear zone.

Yes, Ruby Mountains rocks are made of highly metamorphosed miogeoclinal sedimentary rocks as well as various late Cretaceous and Tertiary granitic rocks. Late Cretaceous granitic rocks which are exposed around the Lamoille Canyon area can be divided into two groups including, equigranular two-mica granitic gneiss and pegmatitic sillimanite-bearing two-mica granitic gneiss. These types of rocks are evidence that the Ruby Mountains were formed from continental extension where rocks found deep in the earth's crust were exposed and folded up.

There are a couple of hotels within 30 miles of the Ruby Mountains Nevada.

Standing at 11,387 feet The Ruby Mountains Nevada's gem. The Ruby Mountains have some of the best views and are by far the best landscapes in Nevada. The mountain ranges offers the best hiking trails and a camping ground. It offers hiking trails along rushing waterfalls and fields of blazing wild flowers. There are endless of activities to enjoy here including hiking, skiing, fishing, camping, mountain biking, and backpacking. Joey Gilbert believes that the people of Elko are very lucky and that Ruby Mountains in Spring Creek, Nevada are historically significant with all that they have to offer to the world. It's a perfect spot for a getaway from the city madness.

Spring Creek Marina Park
Spring Creek Marina Park is a park surrounding the beautiful Spring Creek Lake. The Marina Park is 8-acres surrounding 32-acre Spring Creek fed lake.
Cowabunga Bay Water Park
Cowabunga Bay Water Park is a 23-acre surf-retro-themed water park with over 25 slides, wave pools, and other attractions. Cowabunga Bay water park is a 1960s beach-themed park opened in
Las Vegas Strip-Las Vegas
The Las Vegas Strip is 4.2 miles or 6.8 km long from the north end to the south end in Russell Road. It is a 45 minutes walk from Mandalay Bay on the south end to the Stratosphere casino and hotel on the north end.
Hoover Dam
The total number of people who died while building Hoover Dam is 96. The deaths or fatalities are classified as industrial fatalities.
Fremont Street Experience
The centerpiece of Fremont Street Experience is Viva Vision, world’s largest video screen. Viva Vision is 1,375 feet long and is suspended 90 feet above the pedestrian mall. It has a total 49.3 million LED lights and a 600,000-watt sound system.
Peppermill Concert Hall
Peppermill Concert Hall is a hotel, casino, and a contemporary concert venue in Wendover, Nevada. Peppermill Concert Hall hosts concerts for a wide range of genres and showcases popular performers and comedians. The hall’s total worth is $21 million and it has a 1000-seat capacity