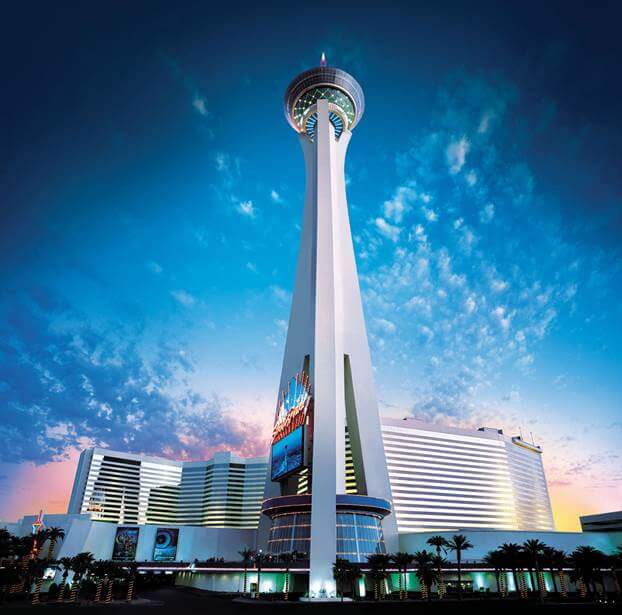 The Stratosphere Tower is the tallest free-standing observation tower in the United States. In its initial design,The Stratosphere was to be the tallest observation tower globally. In the 1990s, the hotel owner Bob Stupak had proposed a higher height but it had to bereduced due to flight safety concerns. Although it’s a hotel and casino, The Strat is home to some of the most amazing activities. So, even if you don’t like gambling, you can also have some fun here. You can enjoy the beautiful view of Las Vegas, Nevada from the observation deck, sky lounge and the revolving restaurant. The Strat also offers one of the craziest ride experiences on its three Thrill Rides. The terrifying and exciting Big Shot, Insanity and X-Scream thrill rides are considered the highest thrill rides in the world. Also, if you are planning on doing a bungee jump in style, this is your destination.

Where Is the Stratosphere Building Vegas Located?

Stratosphere Tower or The Strat (Las Vegas) is ahotel and casino in Paradise, Nevada. Since Paradise is an incorporated city the hotel and casino The Strat is considered to be located in Las Vegas, NV. The Stratosphere Tower is located on the north end of The Strip Las Vegas. The two are so close together that you will not realize when getting in or out ofone of the cities. The Strat has for long remained a major attraction in Las Vegas area. It has even won awards as “The Best Place to View Las Vegas” by the Las Vegas Review Journal Readers.

‍What is the Stratosphere Tower Height?

The Stratosphere Tower Height is 1,149 ft (350.2m). It is the tallest observation tower in the United States, and second to CN Tower in Toronto, Canada in the whole of the Western Hemisphere. During the Stratosphere Tower design, the owner of the hotel, Stupak had suggested extending the height to 1,825 ft (556 m). He was after the title of tallest structure in the world, but the Federal Aviation Administration opposed the new height due to flight concerns. Today the Stratosphere Tower stands as the tallest structure in Las Vegas area and tallest observation tower in the United States.

‍A Ride at The Stratosphere Tower In Las Vegas Costs How Much?

Stratosphere Tower Rides are the most popular attractions at The Strat (Las Vegas). The thrill rides at Stratosphere Tower shoot straight up 160 feet in the air at 45mph, spin while dangling from the SkyPod and then takes a roller coaster ride from 866 feet. The Big Shot ride carries a total 16 riders from the 920-foot-high platform to 1,081 feet up and then down. While up there, the riders get to enjoy the beautiful view of Las Vegas Valley. Other rides include the Insanity, Sky Jump, and X-scream.

How Much Does It Cost to Stay at Stratosphere Tower Las Vegas?

Stratosphere Tower Admission is $20 for adults and hotel guests. Seniors and Nevada resident’s admission is $14. Children ages 4–12 fee is $12, but children ages 3 and under enter free. The following are admission fees only, it does not include other services like rides or hotel food or drinks. Each attraction will attract additional charges. You can always visit the Stratosphere website for tickets and price inquiries.

How Many Stories Is the Stratosphere Tower In Las Vegas?

The stratosphere is 112 stories high. As the tallest observation tower in the United States, the Stratosphere Tower dominates the Las Vegas skyline. Level 112 at 909 feet also considered the selfie spot at The Strat, is the highest point in Las Vegas. This is where the Big Shot ride is located. Just below, on level 109 at 866 feet is the X-Scream, Insanity, and outdoor observation deck. Level 108 at 855 feet is the Skyjump location as well as the indoor observation deck, and 108 Eats & 108 Drinks area. Level 107 at 844 feet is home to the Sky lounge. Level 106, at 832 feet is the top of the world restaurant. Level 104 at 808 feet is the meeting and private dining rooms. And finally, at 785 feet or level 103 is non other than the Chapel in the clouds wedding chapel.

Stratosphere Tower is the tallest free standing structure in Las Vegas standing at a height of 1,149 feet (350.2m). As an observation tower, The Strat is the tallest in the whole of the United States. Stupak considered extending the height to 1,825 ft (556 m) seeking the title of tallest structure in the world but the Federal Aviation Administration opposed the height due to flight concerns.

The best attractions near the Stratosphere Tower include:

Does the Stratosphere Tower Have A Restaurant on Site?

Stratosphere tower has a number of restaurants on site including Top of the World, PT's Wings & Sports, Strat Café, 108 Eats, Starbucks, Nunzio's, Elation Pool Café & Bar, Quick Bites, In-Room Dining, and Group Dining. Among them, Top of the World and 108 Eats are the most amazing. The two are located at the top of the tower on the SkyPod. Here, you can take your favorite meals while enjoying the gorgeous views of the Las Vegas Valley.

You cannot beat the views at the Stratosphere Tower. The SkyPod at 1,149 feet (350.2m) offers you stunning view of Las Vegas. You can watch the beautiful city while having fun on the three thrill rides. You can also go a step higher and do a bungee jump from the top of the Tower. At level 112 of the Stratosphere tower is the selfie point where you get to view the city in a completely different way. It is the best experience for the adrenaline junkies. Inside the SkyPod are the observation decks where you also get amazing views of downtown Las Vegas.

Does the Stratosphere Tower Offer Parking?

Yes, the Stratosphere Tower offer free parking and free valet. The Strat has plenty of free parking for guests who wish to self-park in the lot directly across Las Vegas Boulevard (east of casino).

Stratosphere Tower or The STRAT Hotel, Casino & SkyPod is conveniently located between Downtown las Vegas and The Strip. The 1,149-foot iconic observation tower is a major attraction in Las Vegas. Its shear beauty attracts many from a far and the views it gives of the Las Vegas Valley are even more stunning. It is not a gambling destination, this is the place you go to test if you are acrophobic. The three thrill rides will test you to the limit. Dangling over 900 foot is not for the faint hearted, but for adrenaline junkies, this is home. At the SkyPod, you can also make your vows to your loved one on the wedding chapel situated on level 103. Joey Gilbert say's that the Las Vegas Valley, like Paradise in Nevada is one of the best places to visit, it has elegant destinations and lots of exciting activities.

Cave Lake State Park
Cave Lake State Park standing at an elevation of 7,300 feet is a recreation in Ely, Nevada. Cave Lake State Park Ely occupies a total area of 4,000 acres. Cave Lake is a reservoir formed in 1932 after
Peppermill Concert Hall
Peppermill Concert Hall is a hotel, casino, and a contemporary concert venue in Wendover, Nevada. Peppermill Concert Hall hosts concerts for a wide range of genres and showcases popular performers and comedians. The hall’s total worth is $21 million and it has a 1000-seat capacity
Ghost Town
A ghost town refers to a deserted or abandoned city, town, or village with some remaining buildings and infrastructure. Most ghost towns in the state of Nevada started of as mining boomtowns but were later abandoned when the mining business declined
Nevada Museum of Art
Nevada Museum of Art (NMA) is an art Museum in downtown Reno, Nevada. This is the only American Alliance of Museums accredited art museum in Nevada, and has collection of about 2000 pieces of 19th through 21st-century artwork.
Wet ‘n’ Wild Las Vegas
Wet 'n' Wild Las Vegas is located in Spring Valley,Nevada. Wet ‘n’ Wild Las Vegas is located just 20 minutes away from the famous Vegas Strip and has a number of attractions including swimming pools, slides, water falls, and much more.
Sunrise Mountain
Sunrise Mountain is a rocky mountain in Sunrise Manor, Clark County, Nevada. Sunrise Manor is an unincorporated town in Clark County, Nevada just next to Las Vegas and Nellis Air Force Base. Sunrise Mountain has an elevation of 1025m. At the base of Sunrise Mountain is the Vishnu Schist, some of the oldestrocks in North America.