Study: People Who Have Recovered From COVID-19 Unlikely to Benefit From Vaccine 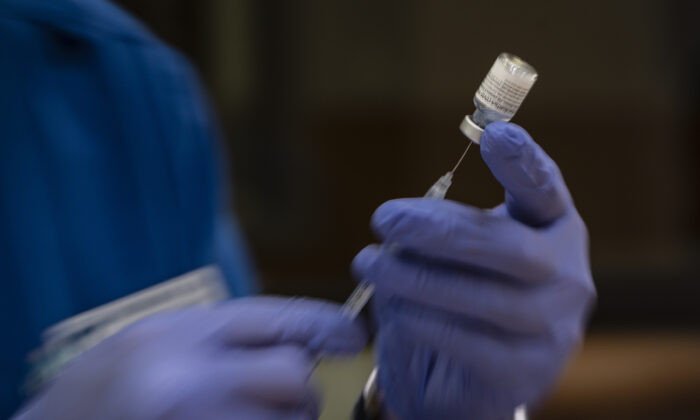 People who have previously been infected with the virus that causes COVID-19 are protected against being infected again and thus do not need a vaccine, according to a new study.

“Our conclusion is that if you were previously infected you are protected because of the previous infection and you don’t need the vaccine,” Dr. Nabin Shrestha, of the Cleveland Clinic’s Department of Infectious Disease, told The Epoch Times.

They found the vaccines were strongly effective in preventing infection from the CCP (Chinese Communist Party) virus, which causes COVID-19, but that previous infection also bestowed a natural immunity.

“Among the people who were previously infected, whether they took the vaccine or not, there really were no COVID cases,” Shrestha said.

Of the 52,238 employees studied, 2,579 were previously infected. About half of those remained unvaccinated. Of the 49,659 employees who did not have a previous infection, 41 percent did not get a vaccine.

Using a Cox proportional hazards regression model and adjusting for the phase of the pandemic, vaccination was linked to a significantly lower risk of infection among those not previously infected but not among those who did get COVID-19 and then recover.

In conclusion, the authors wrote, “Individuals who had had SARS-CoV-2 infection are unlikely to benefit from COVID-19 vaccination, and vaccines can be safely prioritized to those who have not been infected before.”

SARS-CoV-2 is another name for the CCP virus.

The study is not peer-reviewed. It was submitted to journals, but they rejected it “because they think it’s not a priority for them,” Shrestha said. But it adds to the growing body of research that supports natural immunity existing for some time among those who contract the illness.

Research published last month indicated that people who recovered from mild COVID-19 have long-lasting antibody protection. That built on research that reached a similar finding. Previous research also indicated that people who had COVID-19 showed virus-specific T cell responses. The World Health Organization on May 10, in an updated scientific brief (pdf), said that most people who are infected with the CCP virus and recover develop “strong protective immune responses” which remain “robust and protective against reinfection for at least 6–8 months.”

Based on what Cleveland Clinic researchers found, natural protection from infection lasts at least a year.

The Centers for Disease Control and Prevention (CDC) currently recommends virtually everybody get a COVID-19 vaccine. In a brief last updated in March, the agency acknowledges that studies indicate people who recover from the disease are protected against reinfection. The evidence “suggests that the risk of SARS-CoV-2 reinfection is low in the months after initial infection but may increase with time due to waning immunity,” the agency stated.

The CDC declined to respond to the new study.

“We do not comment on non-CDC authored papers. We continually evaluate the science that leads to our guidance, and if it needs to be changed, we will be base that on our own research and studies,” a spokesman told The Epoch Times in an email.

“I personally feel that the vaccines are amazingly effective. We need to use them wisely. We should really not be thinking of this as a U.S. problem it is a global problem,” he said. “It would make more sense to use the vaccine anywhere in the world where it would be effective in getting the pandemic under control.”

Meiling Lee contributed to this report.

Nevada Museum of Art
Nevada Museum of Art (NMA) is an art Museum in downtown Reno, Nevada. This is the only American Alliance of Museums accredited art museum in Nevada, and has collection of about 2000 pieces of 19th through 21st-century artwork.
Colorado River Laughlin, NV
Colorado River tributaries in the North are Green, Gunnison, and San Juan, and they deliver 9million acre feet of water into the River.
Ghost Town
A ghost town refers to a deserted or abandoned city, town, or village with some remaining buildings and infrastructure. Most ghost towns in the state of Nevada started of as mining boomtowns but were later abandoned when the mining business declined
Las Vegas Strip-Las Vegas
The Las Vegas Strip is 4.2 miles or 6.8 km long from the north end to the south end in Russell Road. It is a 45 minutes walk from Mandalay Bay on the south end to the Stratosphere casino and hotel on the north end.
The Mob Museum
The Mob Museum Las Vegas, Nevada also known as The National Museum of Organized Crime and Law Enforcement, is a nonprofit organization dedicated to advance the public understanding of organized crime and the impact it has had on American society. The Mob Museum has 3 floors and a basement (The Underground) full of exhibits.
Casino Fandango
Casino Fandango was opened in July 2003 after the renovation of an 80,000 square feet warehouse. Casino Fandango has a total 42,943 square feet gaming space, movie theater,