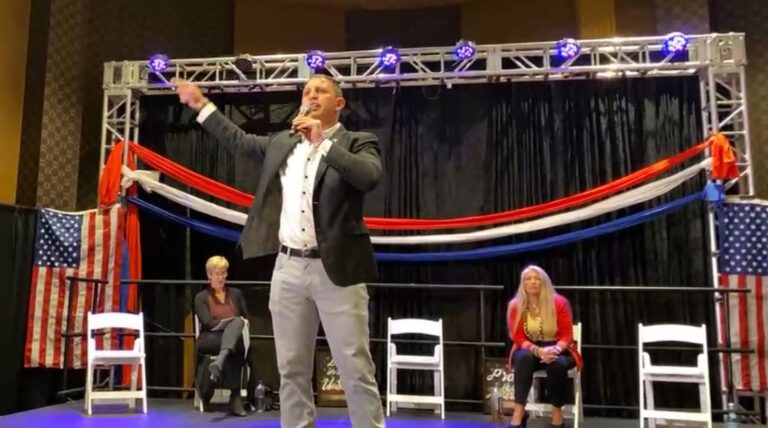 Joey was heavily involved in Pres. Trump’s lawsuit in Nevada in the Carson City State District Court case challenging the election results and stated that Trump had won Nevada by 44K votes. In Joey’s announcement speech today, he pledged to focus on election integrity.

A newcomer to Nevada politics, Joey was a champion boxer. But for the last year and a half Joey has been leading the fight against Sisolak’s lock downs, church closing, hydroxychloroquine ban and vaccines from the beginning. A successful Reno lawyer and passionate advocate, Joey is a flame thrower. Just watch for yourself. Joey went after Sheriff Lombardo and Mayor Lee as well, attacking their public records and questioning their commitment to take on Sisolak. Joey is well known in Reno with bill boards across town for his law practice. But he’s a relative unknown in Clark County, so you can expect to see a lot more of him down here in the coming months.

Spring Creek Marina Park
Spring Creek Marina Park is a park surrounding the beautiful Spring Creek Lake. The Marina Park is 8-acres surrounding 32-acre Spring Creek fed lake.
Sierra Sage Golf Course
Sierra Sage Golf Course is an 18-hole all year-round classic desert layout in Reno, Nevada. Sierra Sage Golf Course was built in 1960 by the U.S Air Force for Stead Air Force Base personnel use
South Point Hotel Casino & Spa
South Point Hotel, Casino and Spa is 24-story 3.5-star sparesort in Las Vegas area, Nevada. The 1,350-room casino was opened in November 2005 under the name South Coast
Ghost Town
A ghost town refers to a deserted or abandoned city, town, or village with some remaining buildings and infrastructure. Most ghost towns in the state of Nevada started of as mining boomtowns but were later abandoned when the mining business declined
Las Vegas Motor Speedway
The Speedway track length is 1.5 miles equivalent to 2.4 kilometers. This is the length used by NASCAR and IRL racing since 1996. However, in 2011 the IndyCar remeasured the Motor Speedway length and concluded it was a bit bigger,
Fremont Street Experience
The centerpiece of Fremont Street Experience is Viva Vision, world’s largest video screen. Viva Vision is 1,375 feet long and is suspended 90 feet above the pedestrian mall. It has a total 49.3 million LED lights and a 600,000-watt sound system.